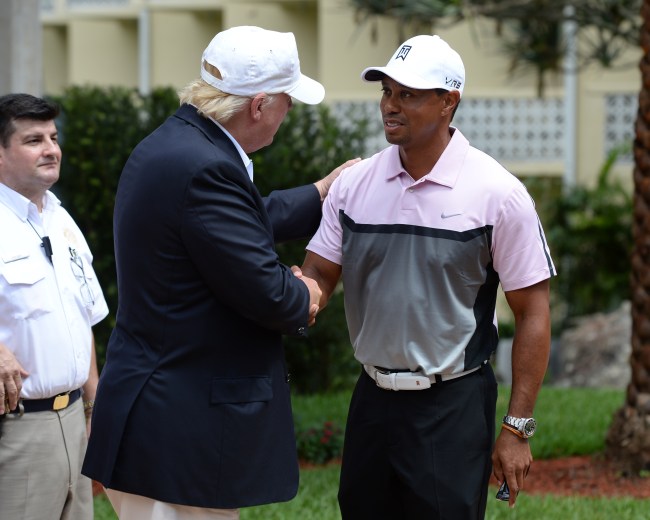 Tiger Woods returned to greatness on Sunday when he made a stunning comeback to win the Masters. At Augusta National Golf Club, Woods won his fifth Masters tournament. On Monday, President Trump announced that he was going to award Tiger with the Presidential Medal of Freedom.

In a tweet, the President of the United States said that he “spoke to Tiger Woods to congratulate him on the great victory he had in yesterday’s Masters.” Then the POTUS revealed that “because of his incredible Success & Comeback in Sports (Golf) and, more importantly, LIFE, I will be presenting him with the PRESIDENTIAL MEDAL OF FREEDOM!”

Spoke to @TigerWoods to congratulate him on the great victory he had in yesterday’s @TheMasters, & to inform him that because of his incredible Success & Comeback in Sports (Golf) and, more importantly, LIFE, I will be presenting him with the PRESIDENTIAL MEDAL OF FREEDOM!

The Presidential Medal of Freedom is the highest decoration that can be given to a civilian, which does not have to be a U.S. citizen. The medal awards civilians “for especially meritorious contribution to the security or national interests of the United States, or world peace, or cultural or other significant public or private endeavors.”

Medal winners are selected by the POTUS with the assistance of the Distinguished Civilian Service Awards Board, an advisory group. The Presidential Medal of Freedom was first introduced by President Harry S. Truman on July 6, 1945, when he signed Executive Order 9586. Originally, it was designed to celebrate notable citizens who helped the country during World War II. In 1963, President John F. Kennedy expanded the award to recognize citizens who made great cultural achievements.

With his latest Masters victory, Tiger Woods now has 15th major championship wins. President Trump and Tiger have had a friendly relationship for years and since becoming the President, Tiger has been questioned about his friendship with POTUS. Woods has said that everyone should “respect the office.”

In 2014, Trump and Woods cut the ribbon on the Tiger Woods Villa at Trump International Doral, a resort and championship golf course in South Florida.