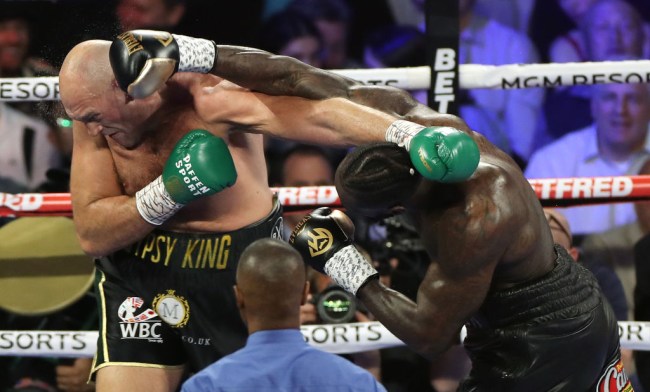 The sports world was captivated on Saturday night with the heavily-anticipated rematch between Tyson Fury and Deontay Wilder. The fight was such an awe-inspiring event that it has seeped into the political sphere. President Donald Trump stayed up to watch the fight and was so impressed by the bruising and bloody clash that he wanted to invite both boxers to the White House.

President Trump was getting ready to leave for an official trip to India, and was answering a few last-minute questions from the press before he departed. While on the White House lawn on Sunday morning, a reporter asked the POTUS if he watched the thrilling heavy championship title bout at the MGM Grand in Las Vegas.

“That was a great fight,” President Trump said of the Wilder Vs. Fury 2, where Britain’s “Gypsy King” reclaimed the WBC heavyweight championship of the world after defeating the Bronze Bomber.

“Maybe we have to bring them both to the White House. I don’t know, because that was really a good one,” Trump added.

Then, President Trump said, “I think we’ll do that,” as his decision to invite both the winner and the loser of the incredible brouhaha to the White House.

Boxers don’t get the automatic invitation to the White House like professional or collegiate champions in team sports do. Over the years, boxers such as Rocky Marciano, Floyd Patterson, and Muhammad Ali have been invited to the White House.

President Trump has been a fight fan since his days of owning casinos and hosting heavyweight boxing matches there. Trump and boxing legend Mike Tyson have been friendly for 40 years. Tyson even endorsed Trump for President in the 2016 election.

In May of 2018, President Trump granted a posthumous pardon to pioneering boxer Jack Johnson, who was the first African-American heavyweight champion.

“I believe Jack Johnson is a worthy person to receive a pardon, to correct a wrong in our history,” Trump said.

Johnson was convicted in 1913 for crimes tied to his relationships with white women. Johnson died in 1946.

Trump noted that there was “tremendous racial tension” during the time of Johnson’s conviction.

President Trump lauded Johnson as “one of the greatest that ever lived. He was pretty much unbeatable.”