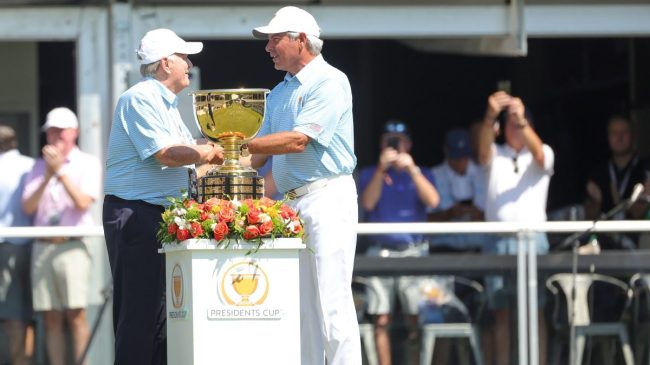 The 2023 Presidents Cup got underway Thursday afternoon at the Quail Hollow Club in Charlotte, North Carolina.

The event was initially set to take place in 2022 but was pushed back a year due to the COVID-19 pandemic. But that’s far from the biggest change that has happened in the past year.

While the American team is often the heavy favorite over the Internation (sans Europe) team, the US is even more heavily-favored this time around. That’s due in large part to the formation of the Saudi-backed LIV Golf Series.

Both the Presidents Cup and the Ryder Cup banned LIV members from competing in their events. The ruling absolutely decimated the International team. Not only did it rule out Australian Cameron Smith, the team’s top-ranked player, but it also eliminated 23-year-old Chilean star Joaquin Niemann. Niemann and Smith both automatically qualified for the team, but their spots were instead converted to captain’s picks for captain Trevor Immelman.

One logical pick for Immelman would be young Mexican star Abraham Ancer. But Ancer, like Smith and Niemann, was ineligible due to his LIV affiliation. Other big names such as Louis Oosthuizen, Charl Schwartzel and Anirban Lahiri were also ineligible.

The American side, meanwhile, didn’t lose any automatically qualified players. But captain Davis Love III did lose a number of big-name stars who could’ve been captain’s picks. Brooks Koepka and Bryson Dechambeau both featured on the winning 2022 Ryder Cup team. While Patrick Reed and Talor Gooch both presented solid cases to be selected.

Fans took note of the lack of firepower, and the evidence of that was unmistakable.

The Presidents Cup may not have the same hype and excitement as the Ryder Cup. But that doesn’t mean it’s not a big deal, especially when it’s held on US soil.

This year’s event, however, took a big hit from the absence of some of the sport’s biggest names. One photo, in particular, shows just how big that impact was.

The photo on the right was taken just prior to the final foursome teeing off. Though the grandstand did appear full as the first groups teed off. Sports Illustrated reporter Bob Harig suggested weather also played a role in the small crowd.

To be fair it’s 92 degrees. They were sitting in metal bleachers with no shade. They have a lot of people here. And my guess is tomorrow when it’s 75 degrees thar scene will look different when the last group tees off.

It’s clear either way that the event is missing some of the game’s biggest draws. LIV Golf fans and executives have to be happy to see the impact.