Heated Soccer Brawl Results In 19 Cards Handed Out Thanks To Kicks, Punches, And More Flopping Than A Fish Out Of Water 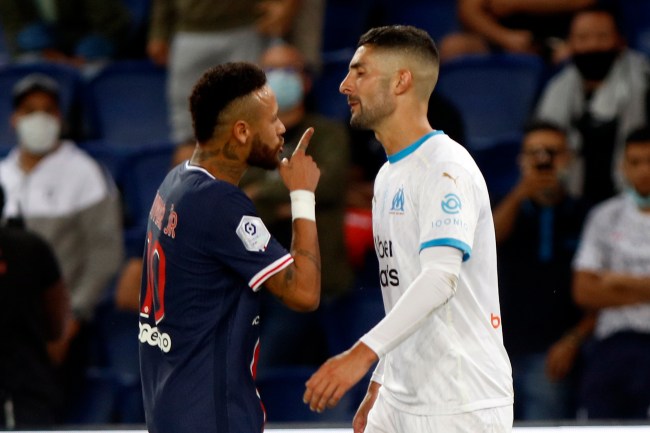 I cannot recall ever seeing a fight in any pro soccer game that resulted in this many cards handed out by the refs. I’m sure there have been more but I haven’t seen them. This brawl went down in a match between reigning Ligue 1 champions PSG and Marseille and when the dust had settled the referees passed out 5 red cards and an additional 14 yellow cards.

The fight took place during injury time/additional time that was added after the 90th minute of the game and Marseille won the 1-0. Global superstar Neymar Jr. would later tell the refs he heard a racist comment directed at him during the kerfuffle. If we are to believe Neymar, this led to him throwing a punch which resulted in a straight red card.

Elsewhere, there are kicks being thrown. Punches galore. One player flops on the ground after barely being shoved and the announcer loses his mind thinking it was a headbutt. After the match, Neymar took to social media to say his only regret was not punching Marseille’s Spanish defender Alvaro Gonzalez in the face because he punched him in the back of the head instead.

beIN Sports has a full clip of the video on their YouTube channel. Unfortunately, I wasn’t able to watch this match live as my trash cable provider (Frontier) has dropped beIN Sports along with the MLB Network and Fox Sports Sun which airs Rays and Lightning games. But I’m thankful beIN Sports was kind enough to put this footage up on YouTube:

Side note: I cannot recall ever seeing a truly great soccer fight. The iconic Zidane headbutt was exactly that, but not a fight. I’m fully aware that it’s not the NHL and players are quickly separated before they’re able to knock each other out but you’d think that at some point there’d be a top tier brawl with some solid punches landed, rigth? I know it happens on weekend/rec leagues but not at the highest levels.

Neymar was given a red card. Kurzawa and Amavi were given reds after they broke into a legit fight with one another. A Video Assisted Referee (VAR) review is what led to the 5 red cards and 14 yellow cards being passed out. This was only the second game of the season for PSG who got a late start after their appearance and subsequent loss in the Champions League final but they are already 0-0-2 (2 losses) on the season with a -2 goal differential. They have been handcuffed by players sidelined after testing positive recently.

PSG dominated possession (66%), Shots (14 to Marseille’s 5), Shots on Target (4 to 2), and Corners (4 to 2) but they weren’t able to convert in the end and the frustration of the match appears to have fueled the all-out brawl at the end.