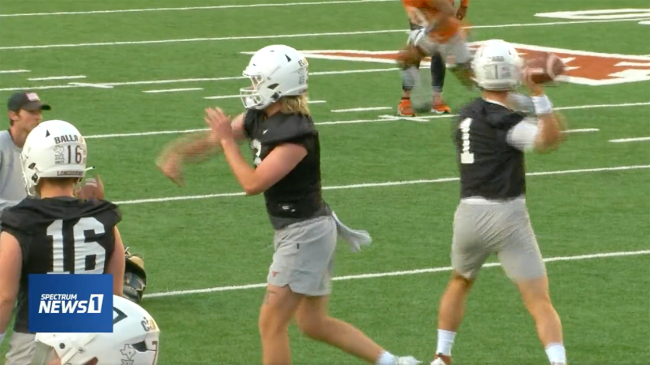 Of the many storylines in college football this year, the quarterback situation at Texas is near the top. The Longhorns have two solid options at the position but one certainly carries a bigger name than the other.

Hudson Card is a 6-foot-2, 200-pound redshirt sophomore and has played in 10 games with two starts. He was a four-star, All-American prospect out of high school and began 2021 as the starter for the Longhorns before Casey Thompson took over.

The other, more national name, is Quinn Ewers— and his glorious mullet. He is one of the most hyped quarterbacks of all-time and comes to Texas by way of Ohio State.

As a former five-star recruit, Ewers chose to reclassify and enroll early at Ohio State as part of the Class of 2022. Ultimately, after arriving to campus late, he was beat out for the starting job and chose to redshirt. Since then, the Texas-native (who should have been a senior in high school last fall) transferred back home to play for the Longhorns.

Ewers is expected to win the starting job, but it will be a completely open competition at the position. Either guy could mess around and win the job.

The first step toward becoming QB1 at Texas took place on Monday as the Longhorns opened up spring ball.

According to reports, both Ewers and Card got fairly equal reps out of the gate. However, as was the case with the other position groups as well, the veteran slightly out-snapped the youngster.

That isn’t to say that either guy has a leg up just yet. In fact, while most Texas fans and college football fans consider Ewers the mullet-rocking savior to save Longhorns football, head coach Steve Sarkisian would not jump to that conclusion.

“You guys write that. We don’t say that,” Sarkisian said on Tuesday. “We say, ‘Focus on what you need to focus on, continue to work on the things that you need to work on.’ We’re a highly competitive program. And the best guy that gives our team the best chance to be successful will play.”

But with that being said, Sarkisian also had some high praise for his first-year gun-slinger. Ewers rolled up to his first practice at Darrell K. Royal Stadium and just looked like he was born to be the starting quarterback at Texas, including his new thigh tattoo that makes it very clear where his allegiance lies.

Sark liked what he saw from Ewers and think he does a great job of handling the hype.

Sark on Quinn Ewers handling the hype around his arrival at Texas:

"I don't feel like this is a guy pressing to try to become 'the man' here… Whether he's running with the 2's or the 1's, he's just putting in work." #HookEm pic.twitter.com/IBWH46MQkm

It is highly unlikely that Sarkisian and his staff will name a starter by the time fall practice rolls around, but there might be a strong indication as to who it might be by then.