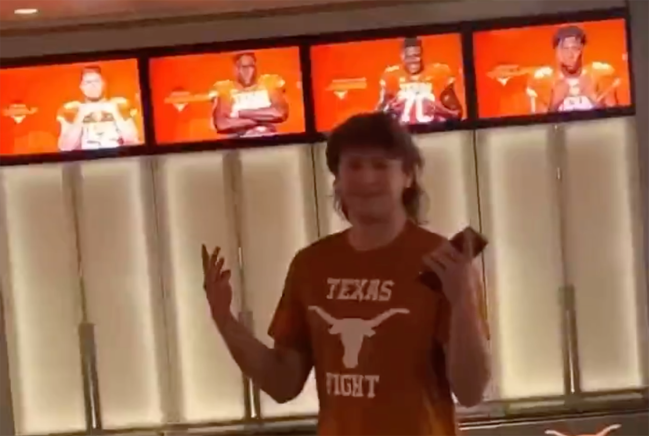 Quinn Ewers has only been in Austin for just over a month but he has already won over his teammates. The 18-year-old’s street cred instantly skyrocketed earlier this week when he was rapping ‘Q Da Fool’ in the locker room.

If you don’t know about Q Da Fool, let me put you on. The 24-year-old rapper is out of the DMV and is signed to Jay-Z’s record label Roc Nation.

Q has previously worked with Zaytoven and Kenny Beats and has collaborated with Maxo Cream, Shy Glizzy and YG, among others. He isn’t considered a “mainstream rapper” but he isn’t considered “underground rapper” at this point in his career.

Ewers is apparently like that. He knows Q Da Fool.

Longhorns running back Keilan Robinson, from the D.C. area like Q Da Fool, recently filmed Ewers rapping in the locker room. He knew every word to Q’s song ‘Catch Up’ from 2017.

In the video, Robinson and his teammates lose their mind as the mullet-rocking quarterback spits bars right along with the track. Their reaction is absolutely priceless and as Robinson put it ‘they locked in now.’

Ewers, who transferred to Texas during the offseason, is expected to be QB1 for the Longhorns this fall. After leaving high school early and enrolling at Ohio State, Ewers missed out on the starting job to C.J. Stroud and entered the transfer portal after the 2021 season.

Now he is turning up to Q Da Fool in Austin.