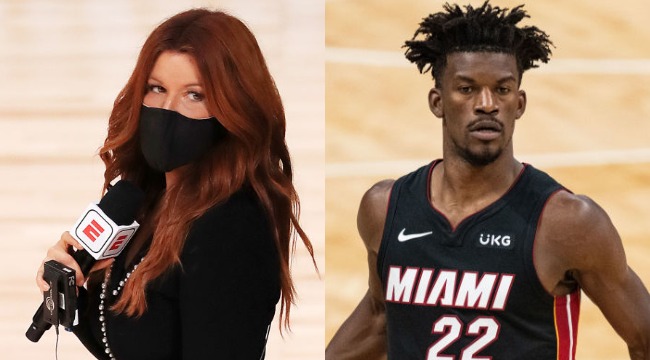 From a journalistic standpoint, the public has no reason to believe that ESPN reporter Rachel Nichols and NBA player Jimmy Butler are guilty of the charge of “slapping cheeks” in July 2020, a strict violation of NBA Bubble protocol and a desecration of 20 years of marriage.

But NBA Twitter sleuths never let truth get in the way of a good story, and in the wake of the recent Nichols’ circus, found it imperative to stoke the coals of the Jimmy Butler Bubble Love Affair narrative.

NBA Insider Chris Haynes reported in July 2020 that a security guard received a complaint of a “large thumping” within a bubble hotel room during the quarantine period. The guard knocked on Butler’s door and he answered, drenched in sweat, claiming he was dribbling a basketball.

As the world crumbles around Nichols following her now infamous “diversity” comment, urban gossip site Jordan Thrilla unleashed the rumor that those thumping sounds from a year ago were in fact the sounds of intense, rhythmic coitaling between two consenting adults.

The Internet then pointed to a cutesy bubble interview Rachel and Jimmy engaged in during Miami’s Finals push last summer, that would be nothing to think twice about if the framework hadn’t already been constructed.

Conspiracy theorists were pleased to also enter into testimony a clip of Karl Anthony-Townes shouting at his former teammate to “Call Rachel Nichols” following a double technical.

how the security guard was after disrupting jimmy butler clapping rachel nichols: pic.twitter.com/ZWsL1eTunh

Jimmy Butler getting ready before he sees Rachel Nichols pic.twitter.com/SCp70FcgTY

Rachel Nichols husband waking up to see why Jimmy Butler is trending pic.twitter.com/5mkE33BzJA