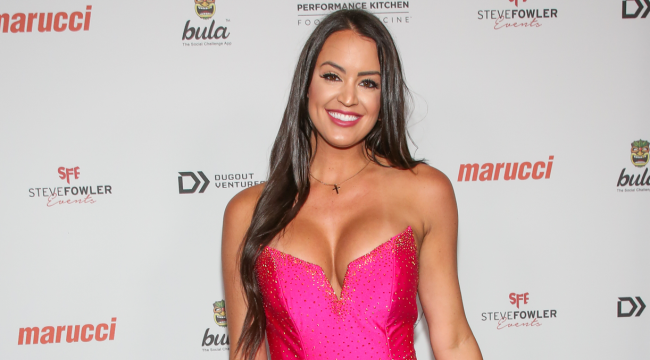 Considering her goal in life is to become the Paige Spiranac of tennis, it comes as little surprise that Rachel Stuhlmann went with a tennis-themed Halloween costume this year. (The real Paige Spiranac opted for a Street Fighter II look this year.)

“LEGEND. @sabatinigaby,” Stuhlmann wrote in the caption of her post which featured her dressed up in three similar outfits to those worn by tennis great Gabriela Sabatini.

“I had so much fun recreating three of @sabatinigaby’s iconic looks,” Stuhlmann added. “I’ve always loved her. Happy Halloween!”

For those that are unfamiliar with Gabriela Sabatini, she is a tennis Hall of Famer from Buenos Aires, Argentina who played from the mid-1980s to the mid-1990s. She earned 41 tournament titles including the 1990 US Open as well as the doubles title with Steffi Graf at Wimbledon in 1988.

In addition to Stuhlmann, another fan favorite in the world of sports, the host of Speak on FS1 Joy Taylor also got into the Halloween spirit, dressing up as Disney’s Tinker Bell.

Taylor, who previously worked as the moderator for FS1’s Skip and Shannon: Undisputed and the news update anchor on The Herd with Colin Cowherd, is also the sister of former NFL defensive end and Pro Football Hall of Famer Jason Taylor.

She also dressed up as Velma from Scooby-Doo!

Speaking of Pro Football Hall of Famers, Rob Gronkowski, who is a lock to be enshrined, and his girlfriend Camille Kostek went all out as well with their Halloween costumes.

Kostek previewed their Halloween costumes with a little tease before the full reveal late Sunday night.

If you like those Halloween costumes, be sure to check out the great looks others in and around the world of sports were wearing like Olivia Dunne in her dark angel fit and Lane Johnson dressed up as (and trolling) his pal Jason Kelce.