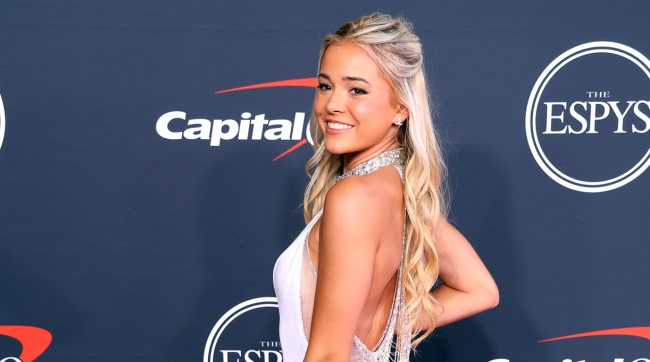 Sports fans love that Olivia Dunne, Annie Agar, Lane Johnson Josie Canseco and others in and around sports all got into the Halloween spirit with some A+ costumes this year.

Olivia Dunne, the popular gymnast from Louisiana State University and a 2017 member of the USA national gymnastics team, is a favorite of sports fans on social media any time of the year.

The 20 year-old, who goes by the nickname “Livvy,” was born and raised in New Jersey where she began training in gymnastics when she was just three years-old.

Dunne was famously the focus of Mississippi State safety Jordan Morant earlier this football season when he posted a video looking out from his hotel room to TikTok shooting his shot with the gymnast.

“good luck but geaux tigahs!:)” Dunne replied, prior to Mississippi State losing by 15 to LSU.

For Halloween, Olivia decided to dress up as what appears to be a dark angel.

“Welcome to the dark side,” Dunne wrote in the caption to her photos.

Bally Sports correspondent Annie Agar has a history of being relentless with Eli Apple jokes in her TikTok videos, famously was on the receiving end of the ire of Apple’s mom, Annie Apple, for the continuous mocking her son.

For Halloween, Agar decided to take aim at another football man by dressing up as “An Campbell: Dan Campbell with no ‘D.'”

“This is my costume this year, I know Lions fans won’t get defensive,” Agar joked in the caption on Instagram.

Interestingly, Kelce actually wore a mask on the sidelines during the Eagles’ win over Pittsburgh on Sunday.

Why would Josie Canseco, who once called her famous dad “selfishly embarrassing” and dated Logan Paul, choose to create such a unique Coraline costume?