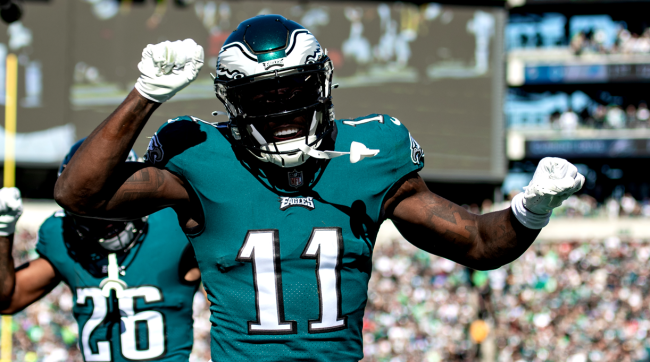 AJ Brown had the kind of day wide receivers dream of having on Sunday during the Eagles’ 35-13 win over Pittsburgh.

Philadelphia’s star wideout went off with six catches for 156 yards and three touchdowns, the latter two numbers being career highs.

Monday morning, Brown revealed on Twitter that he was being “randomly” drug tested.

Funny how that sort of the always happens in the NFL isn’t it?

Have the three best games of your young career? Get randomly drug tested.

NFL fans have seen it time and time again and think it’s pretty funny that AJ Brown is the latest “victim” of the NFL “random” drug testing.

“I wonder if Christian McCaffrey gets one too,” another fan questioned after CMC’s similarly big day on Sunday.

Came back positive for Zod pic.twitter.com/14Kit5PkNh

“Let us know which drug makes you have the best hands in the league,” tweeted another fan.

"Yea Rodger, he's definetly on something. Test him." pic.twitter.com/YAvx6QIDfX

Tested positive for having that Dawg in him,” someone else joked.

I'm almost sure king Derrick Henry will be getting the same visit this morning😂😂😂 pic.twitter.com/kSwjDUDD6O

Brown, in his first year with the Eagles after three excellent season with the Titans, has caught 39 passes for 659 yards and five touchdowns in six games this season. He is currently on pace for 72 receptions, 1,152 yards and eight TDs. The first two numbers would be career highs for the fourth year wide receiver out of Ole Miss.

“I have a lot of trust in A.J. I think that’s a lot of the reason why he’s here,” Jalen Hurts said after the game. “We’ve always had a great relationship. It’s been beautiful to see how it’s unfolded throughout the year, personally for him and I, and us on the field. I always had a lot of admiration for his mentality. He’s been doing great things for us, I’m proud of him as a friend and as a quarterback.”

For his part, Brown said after his big day, “I could have had an even better day. I’m really kind of upset right now. There’s definitely room for improvement … I’m always trying to get a bigger bag.”

Brown is referring to being caught from behind by Minkah Fitzpatrick at the Steelers’ 11 yard line.

“My teammates gave me a hard time for that,” Brown said after the game. “I definitely felt like I was gonna score. Minkah did a good job of sweeping my legs and bringing me down, but I was upset. I think that’s the first time I got caught in the NFL, so my teammates let me hear about it.”