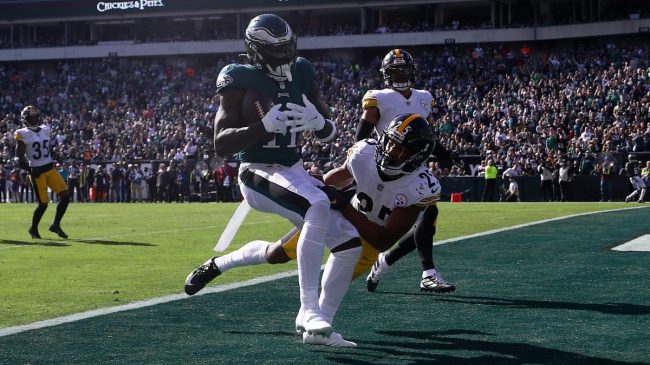 The Philadelphia Eagles have made plenty of noise this season. However, it appears the game against the Pittsburgh Steelers belongs to AJ Brown. Everybody is losing their mind as he totaled three touchdowns in just the first half of the game.

AJ Brown Goes Off For 3 Touchdowns Against The Steelers

The Eagles’ star wide receiver is going off against Pittsburgh. He hauled in not one, not two, but three touchdown receptions in the first half. AJ Brown has played so well, even the NFL Twitter account is surprised.

It’s not every day someone experiences a hat trick in the league. What’s more impressive is Brown accomplished this before the start of the second half. He’s playing at new heights against the Steelers right now which bodes well for the Eagles’ success this year.

AJ Brown is living breathing proof of how a #1 Receiver changes EVERYTHING for a young QB.

Jalen Hurts to AJ Brown is insane right now. I keep thinking these are replays and it’s just another perfect throw/catch

The Titans made a huge mistake.

Hot take, the Titans would be much better on offense if they hadn’t traded AJ Brown

At the end of the day, the Eagles may very well have the most explosive offense in the NFL and it’s all thanks to AJ Brown. Look for this team to keep up the high level of play, as they are becoming the favorite out of the NFC.