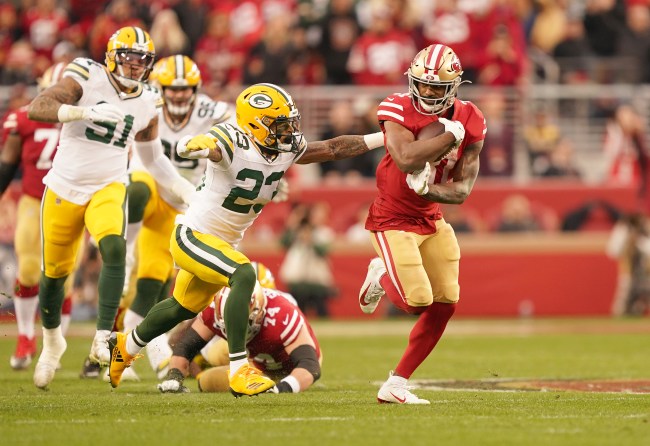 San Francisco 49ers running back Raheem Mostert put up some monster stats against the Green Bay Packers to help his team win the NFC Championship and earn a spot in the Super Bowl. He ran all over Green Bay’s defense for 220-yards and 4 touchdowns in one of the best RB performances in NFL playoffs history.

What’s wild about him putting up such outrageous stats in the playoffs is he’s kind of been a journeyman throughout his relatively short NFL career. Raheem Mostert played college football for Purdue and then went undrafted in the 2015 NFL Draft before being signed by the Philadelphia Eagles as an UFA. He actually killed it in the preseason that year but ended up on the Eagles’ practice squad. From there, he went to the Dolphins, Ravens, Browns, Jets, Chicago Bears, and onto the San Francisco 49ers…This was ALL between 2015 and 2016.

Flashback to his childhood and he was raised in New Smyrna Beach which most Americans know as the ‘Shark Attack Capital of the World’. The high number of shark attacks at New Smyrna Beach can be partially attributed to the great surf there. It’s one of the top surfing destinations in Florida but the water can get churned up and murky and this can often lead to sharks taking a little nibble out of surfers before realizing it’s not an easy meal.

Raheem grew up surfing, and according to an article from Business Insider he was even once approached about a professional surfing/skating contract with Billabong before going on to become a successful NFL running back:

“I’d be out there surfing or skateboarding on my own, not really trying to make a scene or anything,” Mostert said. “And this guy came up to me and wanted to offer me a contract. He was intrigued, basically.”
According to Barrows, the contract would have had Mostert take part in events around the country in the competition circuit. It also would have paid him.
However, Mostert instead stuck with football, later graduating from Purdue University, then entering the NFL.

Raheem is fully physically capable of surfing today but according to a recent report from ESPN he’s actually barred from it. Kind of a bummer for a guy who grew up surfing and loves the sport, isn’t it?

The San Francisco 49ers running back grew up surfing in his hometown of New Smyrna Beach, Florida, but he told ESPN on Monday that his new three-year, $8.7 million contract prohibits him from “extraordinary sports” such as surfing.

“That was put in this year. I’m not allowed to,” said Mostert, who last surfed in January 2019 with a few teammates. “I’ll be able to have time to do that when I’m done playing ball. I’m not too bummed about it. I have one objective, one goal, and that’s to play the game I love right now and to play in the Super Bowl.” (via ESPN)

I don’t have a horse in this race. I’m a born-and-raised Tampa Bay Buccaneers fan which has been a miserable team to root for dating back over a decade. But I think I have to root for Mostert based on the Florida-Surfing connection given that I have no other attachment to this game.

If the 49ers win a Super Bowl this weekend and Mostert runs all over the Kansas City Chiefs I feel like they should give him a 1-time vacation waiver to go surfing if he wants it. He’s currently signed to a 3-year $8.7 million contract but he’ll be able to demand A LOT more if things go well this weekend.