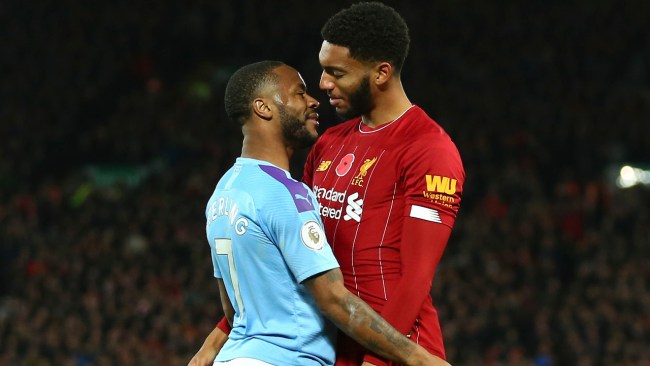 Hold on, folks, let me clear *my* throat…

As I’ve been happy to make clear many times on this wonderful website, I’m a red-blooded Liverpool fan — who happens to still be coasting off the adrenaline of Liverpool’s 3-1 beat down of Manchester City — so anytime I can laugh at a City player, I take it, especially when said player is A) an ex-Liverpool man and B) in the news for being triggered by Liverpool.

And while I auto-pilot on the high from Sunday’s epic victory, Raheem Sterling is apparently in free fall because of it, as he’s been dropped from the England national soccer team after he went for the throat of Joe Gomez, a Liverpool defender.

According to various reports, Sterling, 24, grabbed the throat of 21-year-old Joe Gomez, a Liverpool central defender, after the pair were involved in an on-field confrontation less than a day earlier.

“Sterling was sat down in the canteen when Gomez arrived and leant over from behind to shake his hand, leading him to attempt to grab his team-mate by the neck. The rest of the England players initially thought Sterling was joking, but it soon became clear that he had lost control and the pair were separated. The incident was particularly surprising to the other Liverpool players present as Sterling and Gomez had made the peace following the game at Anfield with an embrace following the final whistle.” [via The Daily Mail]

“We have taken the decision to not consider Raheem for the match against Montenegro on Thursday. One of the great challenges and strengths for us is that we’ve been able to separate club rivalries from the national team. Unfortunately the emotions of yesterday’s game were still raw,” England manager Gareth Southgate said in a statement.

The altercation, which happened towards the end of Liverpool’s 3-1 victory that put them nine points clear of Manchester City in the Premier League, saw the younger Gomez manhandle Sterling as if he were a wittle, itty-bitty puppy dog.

While the pair were quickly separated at the time, Sterling obviously became increasingly butthurt as the hours passed and decided his best course of action was to execute an uncalled for cheap shot 24 hours later. A Manchester City man through and through.

To be fair, if my homie picked me up like I was an infantile child being put in timeout, I’d be pretty aggro as well. Up the Reds.