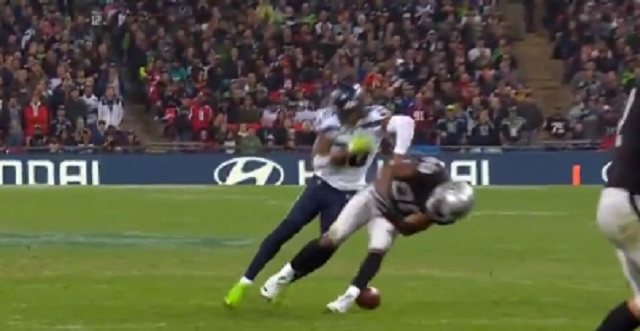 Oakland Raiders wide receiver Amari Cooper was forced to leave Sunday’s game against the Seattle Seahawks in the first half after taking a big hit from Seahawks safety Bradley McDougald .

Despite there being contact to the head and neck area, there was no penalty called on the play.

This wasn't called a penalty.pic.twitter.com/dXC89qgJQU

#Raiders WR Amari Cooper, drilled over the middle with a helmet shot from Bradley McDougald, is headed to the locker room for evaluation.

Raiders fans were upset with the non-call.

NFL: we really need to improve player safety. We need to throw more penalties.
*Amari Cooper dies on the field from an illegal hit*
NFL: ….

In the U.S. you can't touch a QB without a penalty

In England, you can drill your helmet into the side of another player's helmets, no problem.

How is that hit on Amari Cooper not a penalty? Oh yeah, he plays for the Raiders.

where is the penalty/clearly helmet to helmet/Raider season is going to hell in a hand basket "Amari Cooper" pic.twitter.com/51X7vFZtNi

Ok NFL, if you are gonna give all these penalties for quarterback hits but nothing for a clear helmet to helmet hit on a receiver, then where is the discrepancy? Amari Cooper literally looked dead out there

The NFL is such a fucking joke. A penalty gets called for someone tapping Tom Brady on the helmet on a play, but Amari Cooper can be knocked out cold for a moment by a clear helmet to helmet hit and theres NOTHING? Fuck off.

Before today’s game Cooper was reportedly being put on the trade market but that’s obviously on hold depending on the severity of his injury.

The Oakland Raiders have already made headlines in all the wrong ways by dealing away former first-round draft pick Khalil Mack, and now, reports are suggesting they’ll do the same thing with the team’s two first-round picks from the seasons right after Mack arrived.

Fox Sports’ Jay Glazer reported Sunday morning that the Raiders are actively shopping both 2014 first-rounder Amari Cooper and 2015 first-rounder Karl Joseph. Cooper, a wide receiver, has been an inconsistent but occasionally brilliant wide receiver, while Joseph has largely underperformed at safety.

Oakland, at 1-4, is in London this week to face the Seattle Seahawks, and the team looks as unsettled as it has in years.