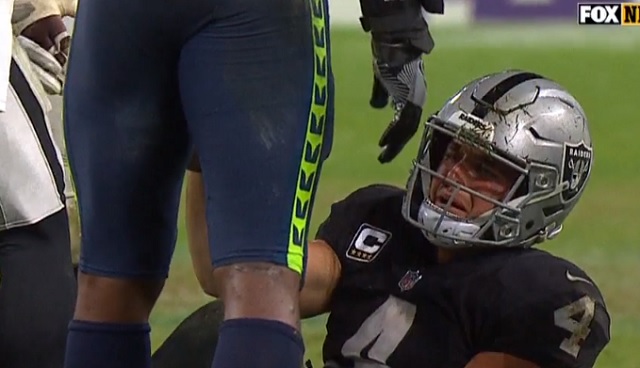 Things didn’t go well for the Oakland Raiders today in their London game against the Seattle Seahawks and it appears the Derek Carr is at his breaking point.

In the fourth quarter of today’s game Carr appeared to cry on the field after taking a sack that forced him to leave the game.

Despite having to leave the game it appears that Carr will be alright.

The #Raiders saw QB Derek Carr battle a shoulder injury, but the belief is it’s not serious. Thanks in part to the bye, Carr may not miss a game. That’s the early word

The Internet had a good laugh at Carr crying.

Gruden bringing that man to tears

I was crying at my home, if that makes any difference……..

Carr’s confidence is absolutely gone. Having 4 different offenses in 5 years and 2 awful rookie offensive tackles will do that

Derek Carr was really crying..Lmaoo the raiders are done..$100 million for Gruden for this nonsense