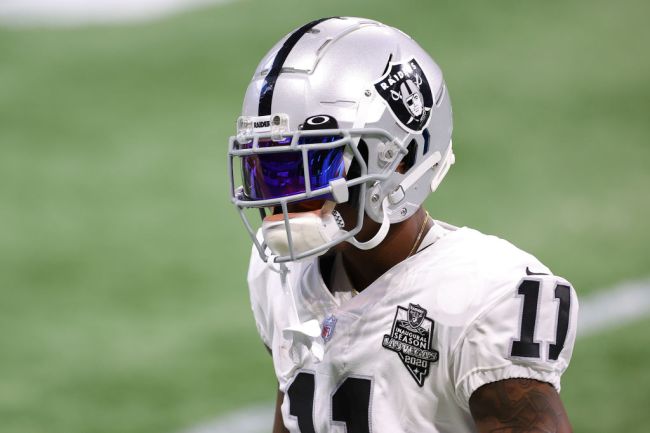 Las Vegas Raiders wide receiver Henry Ruggs was involved in a tragic car accident on Tuesday morning that resulted in the death of the driver of the car he ran into. As a result, he’s no longer in the NFL.

Late Tuesday night, the Raiders announced that they have released the 22-year-old wideout.

“The Raiders are aware of an accident involving Henry Ruggs III that occurred this morning in Las Vegas,” the team wrote in a statement prior to releasing Ruggs. “We are devastated by the loss of life and out thoughts and prayers go out to the victim’s family. We are in the process of gathering information and will have no further comment at this time.”

According to TMZ, police said there were “signs of impairment” and Ruggs has been charged with “DUI resulting in death.”

“Cops tell us Ruggs was behind the wheel, driving his Chevrolet Corvette, when he crashed into a Toyota Rav4 around 3:39 AM. The Toyota caught on fire and first responders located a deceased person in the SUV.

Ruggs was transported to a local hospital for treatment on non-life-threatening injuries. Cops tell us the NFL star showed “signs of impairment” at the scene … and they will be charging him with DUI resulting in death”

NFL fans reacted to the news of the accident and his release from the Raiders:

The kid ruined both lifes… https://t.co/BJQ6RRbCZF

Raiders didn’t wait for his day in court after looking at the evidence. https://t.co/hK31LAYBbw

This is a tragedy that could have been avoided.

I certainly wish the families of all involved peace & comfort during this turbulent time.

Ruggs was in his second season with the Raiders after being drafted 12th overall out of Alabama in 2020. The Montgomery, Alabama native had 24 catches and two touchdowns on the year prior to making his tragic mistake.