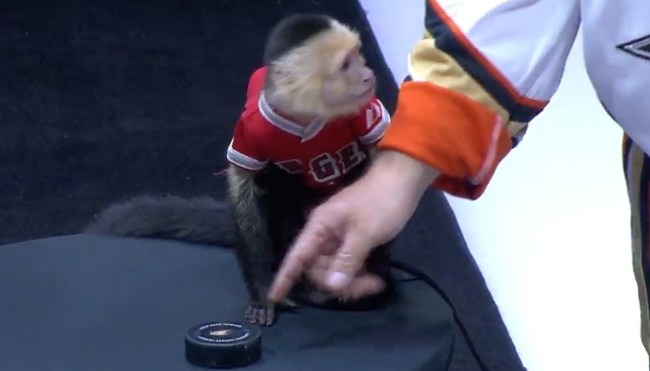 Prior to 2000, the closest thing the MLB team that was then known as the “Anaheim Angels” had to a mascot was the dead guy Christopher Lloyd played in 1994’s Angels in the Outfield.

However, that all changed when the team used an excerpt from another movie that was released that year to pump the crowd up, as it harnessed a clip of a monkey jumping around in Ace Ventura: Pet Detective to help spark a late-game comeback—and just like that, the “Rally Monkey” was born.

Shortly after the contest, the Angels decided to go all-in on the concept by hiring the services of Katie, the white-haired capuchin whose previous claim to fame was portraying Marcel on the episode of Friends aptly titled “The One with the Monkey.”

The Rally Monkey’s popularity peaked when Anaheim harnessed its mojo on the way to winning the World Series in 2002, but Katie is still doing her thing more than two decades after accepting the role of the city’s de facto mascot.

On Sunday night, the Rally Monkey made a pregame appearance at the contest between the  Anaheim Ducks and the Detroit Red Wings to conduct the ceremonial pregame puck drop and, well, it’s safe to say Katie did her job very well.

We had some very special help with our ceremonial first puck thanks to the Rally Monkey! #AngelsNight22 | @Angels pic.twitter.com/gfM3Y1zkkt

If you had any doubts the Rally Monkey is still a good luck charm, the Ducks would ultimately walk away with a 4-3 victory after Rickard Rakell sealed the win with a sexy goal in the shootout.