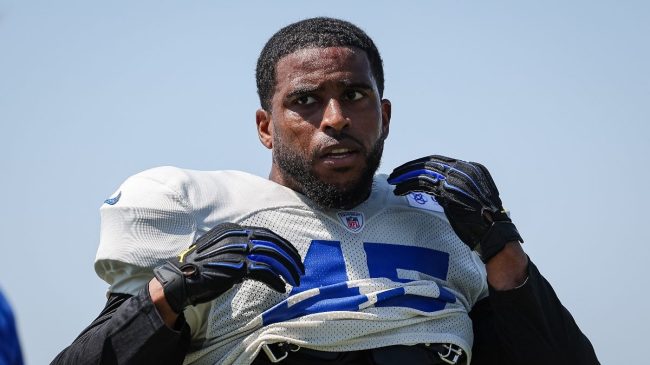 The Los Angeles Rams didn’t play their best in the season opener against the Buffalo Bills. However, they’re still in great shape for the year as they should bounce back. Regardless, star linebacker Bobby Wagner secretly paid tribute to Lakers legend Kobe Bryant during the game and it’s finally been revealed how.

The Rams’ social media team revealed exactly how Wagner honored Bryant during the game. Bobby Wagner had an image of Kobe Bryant on one of his thigh pads. The image could be seen through the fabric of his pants so it was right under our noses the whole time!

This is a spectacularly cool way to honor Kobe Bryant. He meant the world to the city of Los Angeles (and the rest of the world for that matter). Bobby Wagner, an LA native, returned to his hometown to play for the Rams this year. So it only makes sense for him to honor the Lakers legend in the season opener against the Bills.

Bryant’s “Mamba Mentality” mantra has taken the sporting world by storm. You can still find interviews of Kobe talking about his mentality and how it transfers over to every aspect of life in general. It’s awesome to see Bobby Wagner honor Kobe Bryant in this way, especially in his debut game with the Rams.

We could see Wagner pay tribute to Bryant throughout the 2022 season. If that’s the case, keep an eye on Bobby Wagner in Week 2, as he could wear the same thigh pad again. Maybe we’ll see some sick cleats down the line as well (we can only hope)!