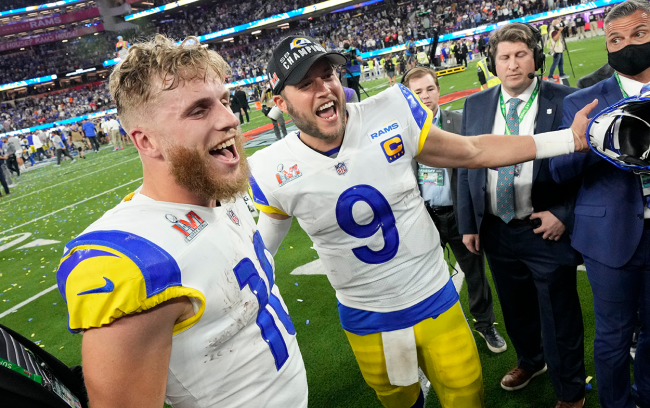 It has been less than a week since the Los Angeles Rams won Super Bowl LVI but they are already putting in the work to get even better for next year… Kind of.

Just a few days after winning the organization’s second NFL Championship, some of the players presumably hopped on a private jet and swung over to Las Vegas. After the game itself, all of the post-Super Bowl media obligations, a trip to Disneyland and a championship parade, it’s party time— although, based on Stafford’s parade performance, the party has not stopped.

While the Rams are in Sin City, they’re working on something that made a big splash during their win over the Bengals. If you haven’t seen it by now, Stafford threw one of the most impressive no-look passes that you will ever see during the fourth quarter.

On the receiving end of the no-look dart was the Super Bowl MVP, Cooper Kupp, who recently went viral for his in-depth explanation of the go-ahead touchdown.

Now, less than seven days later, the two are getting in-tune with their no-look passes for next season. Veteran lineman Andrew Whitworth caught his two teammates practicing their throws in what appears to be a pretty sweet suite at the Wynn.

Stafford and Kupp were practicing no-look passes in their Vegas hotel 😂 (via andrewwhitworth77/IG) pic.twitter.com/DNhFIqixqC

There is simply no quit in Stafford and Kupp. Some people, after playing a 17-game NFL season and winning the Super Bowl may not want to touch a football for awhile. Not those two. They’re throwing the pigskin around before hitting the clubs.