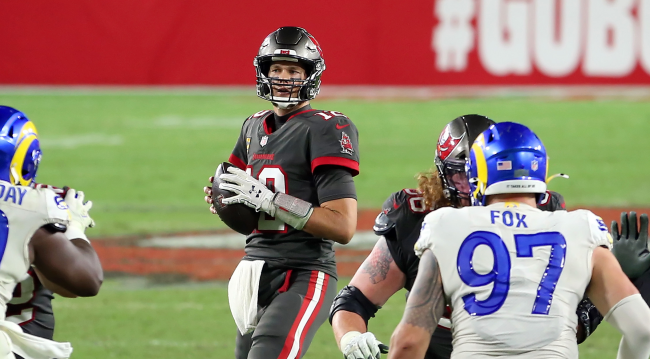 We’ve already got Tom Brady to thank for the “Tuck Rule” and now, if the Los Angeles Rams get their way, the NFL will have another rule that has its origin with the future Hall of Fame quarterback.

A little over 21 years after the infamous 2001 AFC Divisional Playoff game between the New England Patriots and the Oakland Raiders at a snowy Foxboro Stadium, the Rams are proposing a rule change after something that happened in their game versus TB12 in 2020.

During the Rams and Buccaneers’ meeting in Week 11, Brady dropped back to throw a pass on third-and-10, let it go, and the ball was batted into the air by a Rams defensive lineman right back into Brady’s arms.

Brady then proceeded to throw a second pass, completing it to receiver Mike Evans for an 8-yard gain.

Since this was 100 percent against the rules, officials threw a flag.

Here’s where it became tricky for the Rams.

Obviously, this was not any easy decision to make. Give Brady another chance to get a first down, or risk the Bucs going for it on short yardage on fourth down.

As it turned out, the Rams ended up declining the penalty, in turn giving Brady credit for an 8-yard pass completion (on his second pass during the play) and Tampa Bay punted the ball away.

The Rams proposal for 2021 is that if this happens in the future it will be the same penalty as it is for someone who throws a forward pass from beyond the line of scrimmage: 5 yards and a loss of down.

Had this been the rule in 2020, when Brady committed his foul, the Bucs would have been penalized and had the ball facing a fourth-and-15, not a fourth-and-2 or third-and-15.

This and 10 other potential rule changes will be voted on by the NFL Competition Committee this coming May.

• Eliminating overtime in the preseason.
• Establishing a maximum number of players in the setup zone.
• Expanding the prohibition on blocking below the waist by offensive and defensive players on scrimmage downs when contact occurs beyond five yards on either side of the line of scrimmage and more than two yards outside of either offensive tackle.
• Permitting the Replay Official and designated members of the Officiating department to provide certain objective information to the on-field officials.
• Ensuring the enforcement of all accepted penalties committed by either team during successive Try attempts.
• Expanding jersey number options for certain positions.
• Changing the options for winner of an overtime coin toss, and create a true sudden death format.
• Changing the options for winner of an overtime coin toss, eliminate sudden death format, and eliminate overtime in the preseason.
• Permitting a team to maintain possession of the ball after a score by substituting one offensive play (4th and 15 from the kicking team’s 25-yard line) for an onside kickoff attempt.
• Adding an eighth official who is positioned somewhere other than the playing field, with full communication to on-field officials and access to a television monitor.