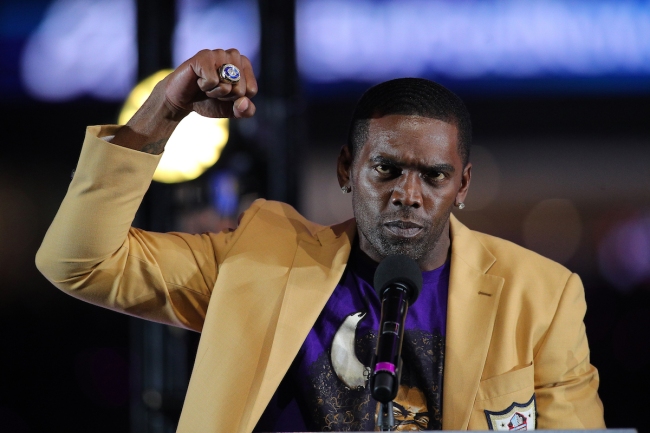 In the pantheon of all-time WRs in NFL history, Randy Moss sure can make an argument for being tops. I mean, anybody who saw him play knows that the Hall of Famer was a beast on the football field, played with supreme confidence and all but created the modern version of prima donna wideouts. Before Moss, most receivers weren’t superstars. But Randy legit changed the game.

But when it comes to flatly putting a name as the best WR in NFL history, few would argue that Jerry Rice should be No. 1, as he set the gold standard for what wideouts could become, and broke (and still holds) some major records. Everybody who came after Rice, like Randy Moss, sort of just elevated the position even more, and took it to a different level than the soft-spoken Rice ever did.

Still, when it was Moss’ turn to give his rankings for the best WR ever, he didn’t stutter when giving his response, boldly claiming he deserves to be tops. That’s not too surprising, but hearing the rest of Randy’s rankings sort of is, because he has Rice all the way at No. 4 — which is just insane. Take a look at what the mercurial wideout and current NFL analyst had to say when chatting about the topic on Terrell Owens’ podcast.

Owens seemed to agree, noting that Rice played most of his career with either Joe Montana or Steve Young.

“When you think about Jerry and the quarterbacks he played with, he never had a drop-off in quarterback. He went from one Hall of Fame quarterback to another,” Owens said.

Fair arguments from both Randy Moss and T.O. here, because, as the two Hall of Famers state, Jerry Rice did have all-time QBs throwing him the ball, with both Joe Montana and Steve Young in the Hall of Fame. But both Moss and Owens also didn’t have slouches themselves, with guys like Tom Brady, Tony Romo, Donovan McNabb and a young Daunte Culpepper throwing them the ball over the years. Brady’s the GOAT, and those other three were all very good passers for at least a few years, so let’s not forget that.

While Moss was quick to put himself at No. 1 and Owens at No. 2 when ranking his best WRs in NFL history, he also wanted to make sure he wasn’t discrediting anything Jerry Rice did throughout his career.

“I don’t want the fans and the people watching your podcast to get it messed up that we dislike or discredit anything Jerry Rice was able to do or ever accomplish,” Moss said. “I don’t want people to think myself and T.O. is slandering or bashing anything Jerry did, because Jerry was at the top.”

All three wideouts, Randy Moss, Terrell Owens and Jerry Rice could make an argument for being the best wide receiver ever. And, if you asked 100 fans, you’d probably get mixed answers depending on what era each grew up watching. But, for my money, Rice has to be tops, and it’s really not that close — regardless of who his quarterbacks were.