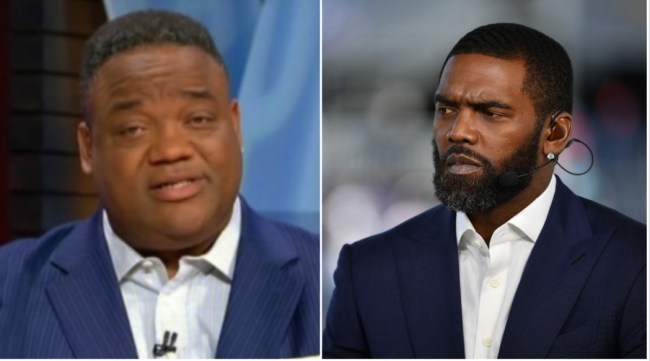 Earlier this week Whitlock went off on Moss for getting emotional in response to Jon Gruden’s racist emails about NFLPA exec Demaurice Smith.

We can't remain this weak and phony. Jon Gruden saying DeMaurice Smith has huge lips, which he does, can't bring us to tears. Are we really this weak? Does the white man's opinion of our lips mean that much? I like my big lips, never had a woman complain about them. https://t.co/oSHNFNU15X

The man cried on national TV because Jon Gruden said Smith had big, rubbery lips. You ain't built for this world if all it takes to make you cry is a 10-year-old email that stated the obvious. https://t.co/LmIRruQfGV

Moss saw Whitlock’s story and responded on Twitter by writing “ON SITE!” which means he’s ready to fight Whitlock whenever he sees him out on the street. Moss deleted the tweet but several people on the Internet screenshotted it and sent it to Whitlock.

Whitlock responded by making another video mocking Moss on Twitter.

When you cry when the white man offends you and threaten violence when the black man calls you out for it. @randymoss The feminine energy has to go. pic.twitter.com/XkKgnPzzCf