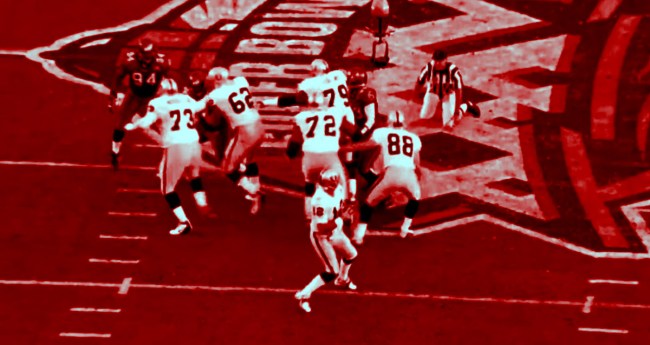 Fans and the media are always very hyped talking about the greatest players to ever participate in (and usually win) a Super Bowl.

Well, to hell with those guys. They already get enough attention.

Instead, I want to harken back to some Super Bowls of days gone by during which certain star NFL players absolutely shat the bed.

Calling Miami quarterback David Woodley a star might be a stretch, but after going 24-10-1 as a starter in his first three years, he was potentially on his way. That all came crashing down on the 24-year-old when he went 4-for-14 for 97 yards, an interception (one TD), and a lost fumble, before giving way to backup Don Strock (who went 0-for-3 passing).

Thanks, in part, to Billy Kilmer’s 14-of-28 passing for 104 yards, three picks (zero TDs), and a 19.6 QB rating, the Miami Dolphins became the first (and still only) team to run the table and complete an NFL season undefeated.

On the wrong end of the biggest rout in Super Bowl history, Elway didn’t help matters with this passing stat-line: 10-for-26, 108 yards, two interceptions (no TDs), and a 19.4 QB rating. Elway also fumbled twice, losing one of them. On the plus side, however, he did score the team’s only touchdown with a three-yard run to close the gap to 41-10 in the third quarter.

Appearing in his and the Vikings’ second straight Super Bowl was of little help to Hall of Famer Fran Tarkenton in 1975. The wily QB managed to go just 11-for-26 passing for 102 yards with three interceptions (no TDs), racking up a very unimpressive 14.1 QB rating. Oh yeah, he also fumbled.

After completing one of his best regular seasons as a pro, the wheels came completely off for Kerry Collins in the 2001 Super Bowl. Collins posted the second worst QB rating in Super Bowl history (7.1) by completing just 15 of his 39 passes for only 112 yards, FOUR interceptions (zero TDs), and a fumble. The Giants’ only score in the game would come via kickoff return.

This would be the second straight Super Bowl for the Buffalo Bills, and second straight loss, due in large part to star running back Thurman Thomas inexplicably forgetting how to play football (and his helmet). After winning the NFL Most Valuable Player Award with 2,067 yards from scrimmage, not only did he misplace his helmet and miss Buffalo’s first series of the game, he only ran for 13 yards on 10 carries. Thankfully, sort of, for him, one of those yards resulted in a touchdown bringing the Bills within 14 points of the Redskins – the closest they would get in the second half until a garbage time TD by Don Beebe in the fourth quarter.

Thurman Thomas wasn’t alone on that day in January 1992, when it comes to Bills not living up to expectations. Coming off the best season of his career, and leading the Bills to 6,525 yards and scoring 458 points, Jim Kelly completed just 28 of his 58 passes for 275 yards, with four interceptions (two TDs), was sacked five times, and fumbled the ball three times (losing two of them).

The good news for for Tony Eason? He made it to the Super Bowl. The bad news? He had to face the ’85 Bears defense. He didn’t make it out of the second quarter before being replaced by Steve Grogan. Why? Well, when he was pulled Eason was 0-for-6 passing, had been sacked 3 times, and a lost fumble.

Rich Gannon really didn’t stand much of a chance in this game as he was facing his head coach of the year before, who knew him (and the Raiders plays) all too well. Gannon threw a Super Bowl record five interceptions, three of which were returned for touchdowns, on 24-of-44 passing for 272 yards and a fumble. Gannon was able to hook up with his receivers (one of them Jerry Rice) for two TD passes in the second half, but by then Oakland was down 34-3 and the game was well over.

Super Bowl III: the game that made Joe Namath a household name. Morrall, a 14-year veteran at this point, led the Colts to the Super Bowl and was named NFL MVP after a Johnny Unitas injury. That’s where the fun ended for him as he went 6-for-17 passing for 71 yards, and three interceptions for a 9.3 QB rating before being lifted… for Unitas, who didn’t do much better, going 11-for-24 for just 110 yards and a pick of his own.

Craig Morton was the starter in the Dallas Cowboys’ loss to the Baltimore Colts in Super Bowl V so this was his chance for redemption against his former team. It didn’t work out well for him. Morton completed only four of his 15 passing attempts for 39 yards and a 0.0 QB rating. In fact, he threw as many completions to the other team (4 picks) as he did to his own squad before being replaced by Norris Reese, who lit up the Cowboys for 22 yards on 4-of-10 passing, and a fumble.

Ah, Eugene Robinson, we will never forget you. The only player to ever be arrested the night before a Super Bowl on a charge of soliciting an undercover police officer for oral sex. That alone would earn him top honors here, but just to make sure, Robinson, who amazingly still started the game the next day, got burned on a John Elway 80-yard touchdown pass to Rod Smith, giving the Broncos a 17-3 lead that they would never reliquish.