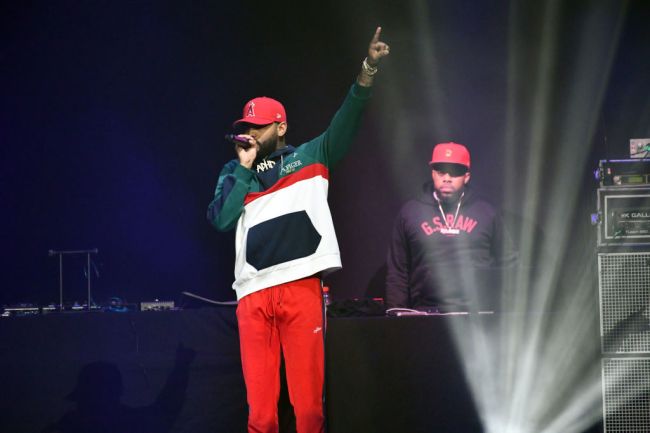 On Saturday afternoon Lucas went on a rant accusing Civil of stealing $60k from him when he hired her six years ago to help with his marketing efforts but instead took the money and stopped responding to his messages.

My son was on the way and you stole 60k from me before I got in the game @KarenCivil . I hired you as a consultant and below attached was the memo you sent me. I was desperate for help and you knew that. After you was paid you went ghost and didn’t expect me to pop. 😈 here I am pic.twitter.com/4JcBDfYOe7

After you got the money paid up front, you stopped answering my calls & every time I hit you, you answered the phone with a attitude like I was messing up your day. I sent you hella messages pleading with you to do your job becuz my back was againts the wall. You took advantage

At this time I was afraid to speak up for myself becuz I didn’t want to get blackballed. I had no idea how this industry Shìt works and I ain’t want you to drag my name thru the mud so out of fear i stayed 🤐 . Until @Mr_Camron spoke up a few years ago on Twitter and then I did

After I spoke up, you had your peoples hit me directly and you tried to threaten me and then tried to make me write this fake ass apology and make myself look crazy to the public eye. See below attached at @KarenCivil’s text back in 2018 to my business partner. Smh pic.twitter.com/RGOKC5MkdB

Smh I was broke and down on my last leg bruh. That 60k was literally my last effort to help me get on and you stole that from me when my son was born. The media protects you but wrong is wrong. At this time I had like 5k followers. What you thought I wasn’t gon pop @KarenCivil? pic.twitter.com/ZoHVWgKnTm

When I created Ross cappicioni, I wanted that to be her first piece of content she worked on. You know what she told me?? Flat out told me “joyner nobody cares about a little white boy being shot”… verbatim @KarenCivil you remember that?

These blogs and publications try to protect you but idgaf bout none of that. @billboard @XXL @revolttv @HNHHNEWS @TheShadeRoom @RollingStone @Complex @HOT97 @sohh @HipHopDX @Genius @BET @thefader @TheSource Ima keep dragging you until you give me my 60k back too. 🤷🏽‍♂️

I been waiting like 7 years to do this shit. I kept telling myself “watch when I get on. She fucked up”.. these days I’m too rich & well off. My fam is good. Couple mansions paid for and all the dream cars you can think of. Owner of a 30m company @AppTully I can keep goin @Karen

Update: Civil released a statement to Baller Alert denying allegations against her.

Baller Alert reached out to Karen Civil, and she provided us with this statement:

It’s easy for him to make broad statements when you aren’t familiar with the backend of business especially Marketing.

Subcontractors were paid including Ravenel Agency, PR, and local Reps (mix show/radio). All parties contracted out on his behalf to execute were paid from the overall budget allotted.

Him not being able to reach me the following day during a scheduled personal vacation cause him to be irate.

His MGMT called me to rectifying the situation after Joyner made his first tweet claims in which I responded we can happily move forward after a public apology was made since he used that same platform to lie about funds being taken from him. I recorded the call just for future circumstances like this.

Unfortunately 6 years later, he’s now utilizing a separate disagreement moment to amplify and create a social momentum around himself.

He and I both had separate conversations with Charlamagne this morning where he passed on his phone number so we can have a discussion directly, but instead he took to social.

Nothing was stolen or taken from Joyner Lucas.

Unfortunately, certain artist are under the impression they have 24/7 access to you. That’s not feasible or possible.

All work done on his behalf were fulfilled.

Subcontractor invoices were made & sent to MGMT Sean MacDonald of Dead Silence CEO.

Which my team also kept records for. -KC