Raquel Pennington’s Corner Refuses To Let Her To Quit Fight After She Tells Them She’s ‘Done’, Amanda Nunes Proceeds To Beat Her Down Into A Bloody Pulp 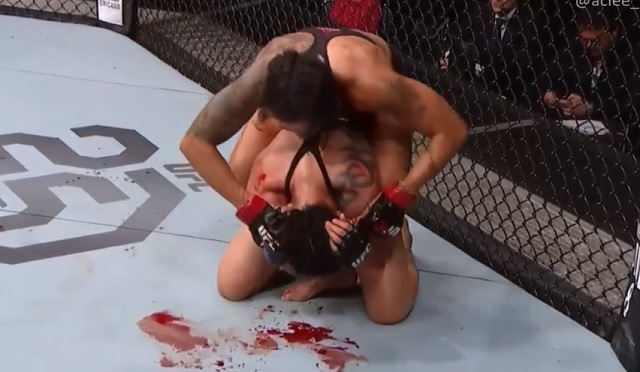 There was a bit of controversy at the end of tonight’s UFC 224 card during the main event fight between Raquel Pennington and Amanda Nunes. In the fourth round of the fight, Pennington, who was struggling after she had her nose broken by Nunes in the early rounds, asked to quit because she felt she was “done” but her coach went on to convince her to fight for one more round.

Pennington did indeed return to the cage to fight for another few minutes before Nunes beat her to a bloody pulp in the cage.

Pennington’s team went on to get criticized by nearly everyone twitter for their actions that put their fighter in harm’s way when she clearly didn’t want to fight anymore.

Raquel Pennington's corner should be ashamed of themselves. There was no need for Pennington to even get off the stool and start the 5th round to begin with when she clearly told her team she was done. #UFC224

This is incredibly uncomfortable to watch. “We’ll recover later”? What? And throughout this no technical advice is shared. Just a pep talk and a refusal to listen to their fighter. Pennington, who is the epitome of a fighter, deserves better than this. https://t.co/WONNOWHWzN

That pretty much goes against everything a corner is supposed to do for a fighter. https://t.co/tx9ca5IACh

Pennington's corner goes straight into the Hall of Shame for overriding her saying she was done and sending her out for that ugly fifth-round scene. Atrocious.

Pennington’s team should ashamed, there was no reason for her to go out there and get beat up for another minute.