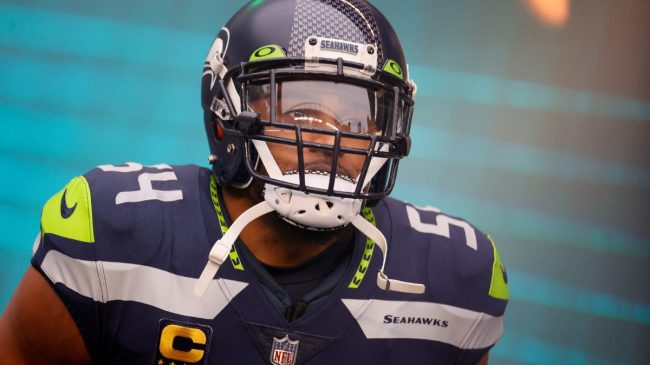 The Los Angeles Rams landed a huge piece to the defense on Thursday.

The reigning Super Bowl champions got even better, signing NFL veteran Bobby Wagner. Wagner previously played for division rival Seattle, where he was a key piece to the daunted “Legion of Boom.”

Wagner has been a mainstay in the middle of that Seahawks defensive unit, playing more snaps than any other defender over the last three years. He’s also been named to six first-team All-Pro teams, ranking behind only new teammate Aaron Donald amongst active players.

Wagner will look to fill the void left by Von Miller, who left LA for Buffalo this offseason.

While he’s now a member of the Rams’ roster, there was one team that remained in contention up until the very last minute.

The Baltimore Ravens were said to have a realistic shot at landing Wagner.

It came down to the #Ravens and #Rams for Wagner. https://t.co/LBwwbbBYh1

In fact, it seemed an offer was made to the star linebacker.

I'm told the #Ravens feel they have a 'very competitive offer' to Bobby Wagner in comparison to the #Rams. The focus of the Wagner pitch was his addition to an already stacked defense & his ability to add to his legacy with the balance of Baltimore's team, per league source.

Unfortunately, Wagner went in another direction, leaving Ravens fans at the altar.

Ravens React To Missing Out On Bobby Wagner

Ravens fans were expectedly unhappy at losing out on Wagner. Immediate social media reaction from the fanbase began to take off surrounding the breaking news.

Bobby Wagner news not going over very well with some Ravens … https://t.co/oFMVx1vJGo

If Bobby Wagner isn’t signed today. These Ravens “insiders” are getting all their accounts reported for false information by me. Don’t play with us like that

The Ravens trying to convince Bobby Wagner to come to Baltimore over the defending Super Bowl champs pic.twitter.com/xBqFW9X1ID

Bobby Wagner used the Ravens to get more from the Rams all by himself. What's the point of an agent?

Ravens fans to Bobby Wagner after he chose to sign with the Rams over the Ravens: pic.twitter.com/pUp31KvXoO

Am I salty that the #Ravens didn’t get Bobby Wagner? Maybe a little. Would I have paid him 5 years 50 million? No way. Good luck with the #Rams!

ANNNNNDDDD…. There it is. That felt like a big waste of time. Thanks for using the @ravens to get more money @Bwagz. We appreciate being your doormat. https://t.co/oI980n6GMP

Damn, Ravens fans are hurting from this Bobby Wagner news.

The Ravens missed out on signing a proven playmaker to lead the 2022 defense. We’ll see if the team takes a chance on another defender in free agency or if they look to add to the roster in the upcoming NFL Draft.