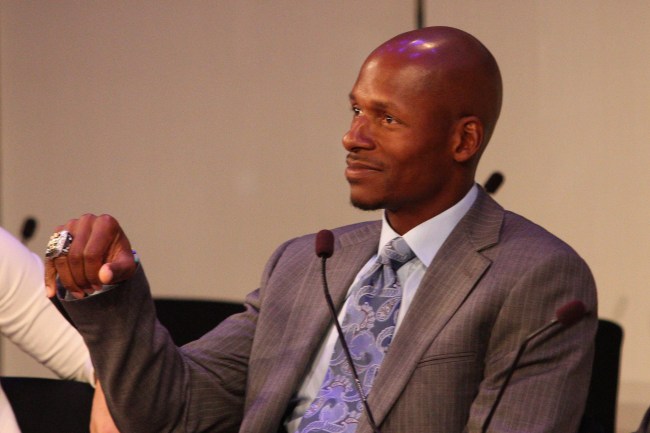 What is it going to take for Ray Allen to stop communicating with attractive strangers online? Back in 2009, he played the “hacked” card after his account publicly tweeted sexual instructions to a woman that are too x-rated for me to post here.

Maybe Ray Ray getting catfished will be the must-needed wakeup call.

According to ESPN, the retired NBA star filed an emergency motion in an Orlando, Florida court to throw out a case where he is accused of stalking someone he met online. Allen claims to the be the victim of catfishing by a man named Bryant Coleman who has allegedly pretended to be several attractive women online, and has baited Allen into sharing personal information.

Coleman claims that Allen is the one who is stalking him.

“Coleman pretended to be a number of attractive women interested in Ray Allen,” read the motion filed on Allen’s behalf. “Ray believed he was speaking with these women and communicated with them.”

Allen’s attorney, David Oscar Markus, released a statement claiming Allen was the victim “of an online scheme to extract money and embarrass him by someone who appears to be troubled.”

Allen claims Coleman threatened to reveal details of their conversations, and that the two parties eventually agreed upon a deal to keep things under wraps. Since then, Allen claims, Coleman has violated the terms of the agreement and continued to harass him online in increasingly creepy manners.

From Allen’s motion, via ESPN:

“When Ray realized he was the victim of this impersonation, he terminated these communications. Mr. Coleman, who had become obsessed with Ray even though they had never met in person and even though Ray wanted nothing to do with him, refused to accept an end to their communications. Coleman continued to post about Ray using various online accounts. Coleman did not limit these posts to Ray. He posted about Ray’s wife, Ray’s children, Ray’s dog, Ray’s homes, Ray’s wife’s restaurant, and numerous other personal items,” read the motion. “Coleman not only posted about these things, he would actually post while physically located inside Ray’s wife’s restaurant in Orlando. And he would make sure they knew it, tagging Ray and his wife on those posts.”

The Associated Press could not find an attorney or a working phone number for Coleman.