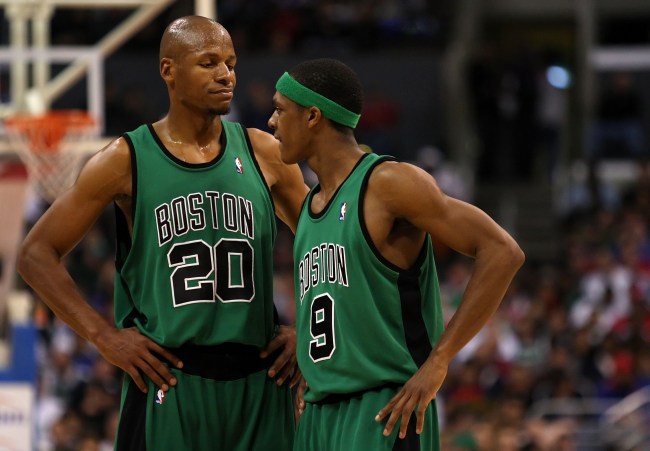 As a Bostonian who runs on Dunkin’, reminiscing about the Celtics of the late 2000s is bittersweet.

The stacked team with Rajon Rondo, Ray Allen, Paul Pierce, Kevin Garnett, and Brian Scalabrine only managed to win one title before abandoning their Ubuntu mantra (an African term that boasts unselfishness as a key to collective success).

Ray Allen committed the cardinal sin of joining the NBA Champion Miami Heat after reports claimed Mr. Shuttlesworth was frustrated that the Celtics organization shopped him during the season and stripped him of his starting spot in favor of a younger Avery Bradley.

News of Allen’s irreconcilable feud with Rajon Rondo followed in Ray’s absence, and former Celtic Kendrick Perkins has revealed the genesis of their beef.

“It was brought to the table, ‘what if we trade Rondo and get CP?’ And KG and Paul (Pierce) were like, ‘no, we ain’t doing that. As great as CP is, we just won the championship. We’re rocking with [Rondo].’ Ray was like, ‘nah, let’s do it.’ And what happened was Rondo ended up finding out about it, and that was it from there,” Perkins said.

“It was even to the point where we brought boxing gloves to the gym, and they got on boxing gloves. We made them box it out for like two rounds.”

Danny Ainge, if you’re reading this, stop holding out on us. Release the boxing tape in the absence of sports. Give the people what they want.