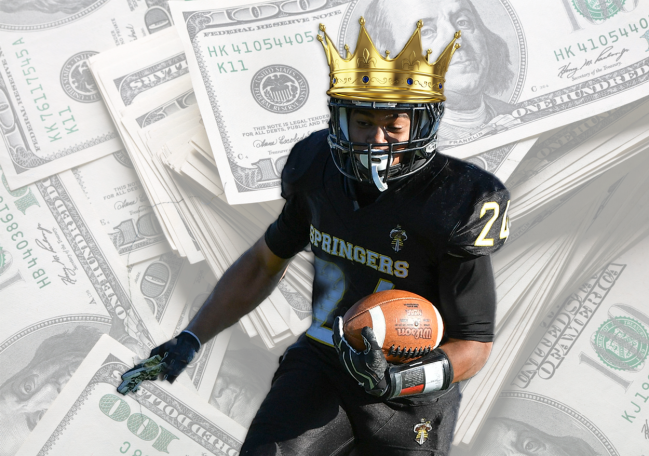 Rayquan Smith is not the starting quarterback for Ohio State or USC. He neither plays the most marketable position, nor does he play on the FBS level. Smith, a rising senior, played running back for Norfolk State, a team that went 6-5 last season on the FCS level.

But that didn’t stop him from cashing-in on NIL.

In fact, he has been dubbed the ‘King of NIL’ because he has signed so, so many deals.

When the NCAA issued its “interim” rules on Name, Image and Likeness last July, Smith (who now competes only in track and field) was hoping to land a job with the local Planet Fitness as a trainer. And then he started to scroll Instagram.

As he was doing so, Smith noticed all kinds of athletes at other schools starting to sign NIL deals. He figured that if they could do it, so could he.

Initially, Smith offered his services for free. He emailed company after company, asking them to sponsor him. At first, only a few got back to him, but he didn’t stop his persistence.

Smith’s first deal came with Smart Cups. Not long thereafter, he became the first HBCU athlete to sign with Eastbay. From there, things started to get serious and he signed an agent to help represent him in the NIL space.

Since then, Norfolk State decathlete and former running back Rayquan Smith’s list of partners has grown astronomically.

Spikeball and Eastbay are amongst Smith’s top partners. He recently inked the former.

I’m very excited to be partnering with @spikeball ☄️🖤 Who Trying to Play With Me! #spikeball #spikeballambassador #rayquansmith #kingofnil pic.twitter.com/kB7uULi5GP

In addition, Smith has deals with Body Armour, Arby’s, Champ Sports, G.O.A.T. Fuel, and local ECHL hockey team, the Norfolk Admirals. According to his agent and On3 Sports, the Richmond-native has landed a total 66 deals to date— in less than a year.

While his five-figure compensation might not be amongst the highest in college sports, the sheer number of deals inked is believed to be the most of any athlete across the country. Smith has 18.5k followers on Instagram, 98.8k followers on TikTok and 3.9k followers on Twitter.

That following does not necessarily compare to other top NIL earners around the country. But Smith doesn’t stop producing content and seeking deals, which has paid off for him.

“There aren’t many athletes at that create content the way that he does,” Smith’s agent Freddie Berry said to On3 Sports. “I’ve worked with Power Five starters, best player on their team arguably, and they’re nowhere near as good when it comes to the NIL aspect. Their photos are just on their Instagram page or just them in their helmet. They’re not willing to kind of step outside of that realm and dabble into the actual marketing side of NIL like him.”

Smith suffered a Lisfranc injury last fall that held him to only four games. It also kept him from competing in track and field. In turn, he entered the transfer portal, but ultimately decided to stay at Norfolk State and focus solely on his career as a decathlete.

While that might seem like an NIL deterrent, Smith’s NIL interest has not wavered. He was even the first guest on Kevin Garnett’s Showtime series.

The King of NIL does not seem soon to be dethroned.