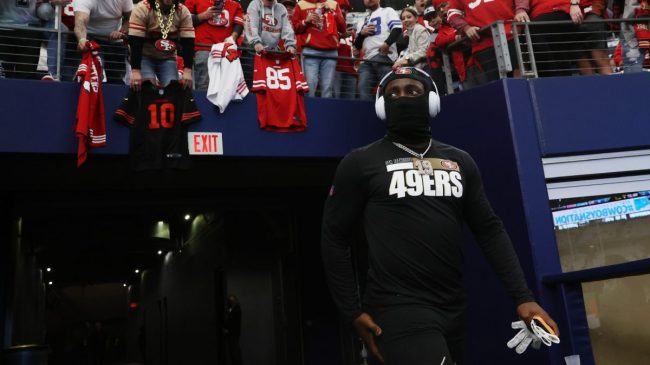 Deebo Samuel has been a talking point on the NFL market this offseason.

The star wideout is due for a contract extension in San Francisco, meaning it’s time for the 49ers to either pay up or deal the pass catcher to the highest bidder.

Samuel has spent three professional seasons with the Niners, helping the team reach the NFC Championship last year. The dynamic receiver was a first-team All-Pro selection in 2021 after recording nearly 1,800 yards from scrimmage. His versatility was on full effect as he notched six scores through the air and eight more on the ground.

As a result, he’s hoping for a nice bump in pay with his next contract extension.

A good place to start would be with the deal that Stefon Diggs just received in Buffalo. While the two have differing styles of play, they do play the same position. They’re both the most explosive players on the offense, as well as their quarterbacks’ favorite targets.

Diggs’s deal was worth $96 million over the next four years. Samuel should be able to land something comparable.

The only question is, will it be with the 49ers or another suitor?

One recent social media development could give us some insight as to what direction this is headed.

Things are starting to get interesting. Deebo Samuel has unfollowed the #49ers on IG 👀 pic.twitter.com/vxTjDY3fJL

Samuel apparently unfollowed the 49ers on Instagram this week, possibly signaling some tension with the organization.

Fans were quick to react to the news on social media.

The whole "who followed & unfollowed who" thing is exhausting.

Either way, Deebo Samuel is going to get paid. WR market is exploding #NFL #49ers

Joe Douglas waking up to see that Deebo Samuel unfollowed the 49ers on IG pic.twitter.com/tBx5V6GilK

I also noticed that Deebo Samuel took the 49ers out of his top 8 friends on MySpace.

The 49ers after Deebo Samuel unfollowed them on IG pic.twitter.com/PhhIh6DPSB

#49ers star WR Deebo Samuel has reportedly unfollowed the team page on his instagram account. Something to keep an eye on as The NFL Draft nears.

We’ll have to keep an eye on how things play out in San Francisco over the coming weeks, but this could get interesting.