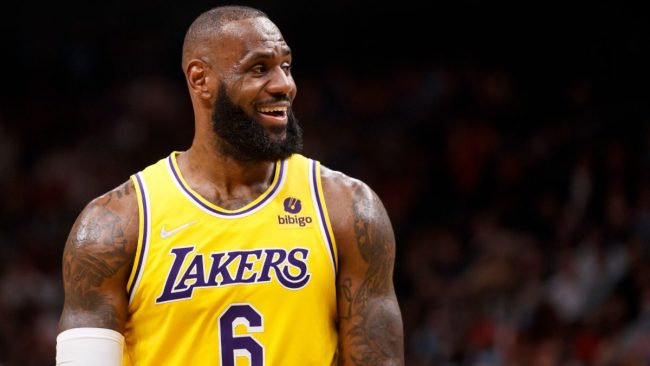 LeBron James has spoken on his future as an NBA owner.

The megastar joined the Uninterrupted podcast to talk about the possibility of buying a team when his playing days are through. The podcast dropped a preview of its upcoming show, which is set to drop at 9 AM Friday morning.

"I want a team in Vegas." 👀 @KingJames hints at his next big move on an all new episode of #TheShop TOMORROW at 9 am PT on our YouTube! 📺 pic.twitter.com/HIZKsBYPGF

LeBron not only discusses his thoughts on purchasing an organization, but he also speaks on where he’d like that team to play.

Now, as most know, there’s not yet an NBA team in Vegas, though it’s likely just a matter of time before the league expands. We’ve already seen the NFL and NHL find homes in Sin City, and the NBA is sure to follow.

NBA insider Bill Simmons has spoken on this topic before, speculating that Fenway Sports Group will be a prime candidate to buy a team that eventually moves to Las Vegas. LeBron is a partner in the company.

If it happens, it will certainly make huge waves in the league.

The only issue could be timing. While LeBron is on the back end of his career, he’s coming off of a season where averaged more than 30 points a game. At 37 years old, he’s also hinted at the notion of playing with his son, Bronny, who’s yet to enter college.

Where he won’t have any issues is with the purchase itself. It was recently announced that James is the first active NBA player to become a billionaire.

With news of James’s desire to become an owner making its way around social media, fans and media are reacting.

The year is 2030 and the Las Vegas Outlaws ™️ led by Bronny and Bryce James just won the NBA Finals with coach/owner @KingJames on the sidelines.

LeBron, himself, commented on the post with a message that read, “Speak It Into Existence!”

Speaking It Into Existence! https://t.co/ARRiTp43cx

James appears serious about owning a team. We’ll see if his gets his opportunity over the next few years to do so.