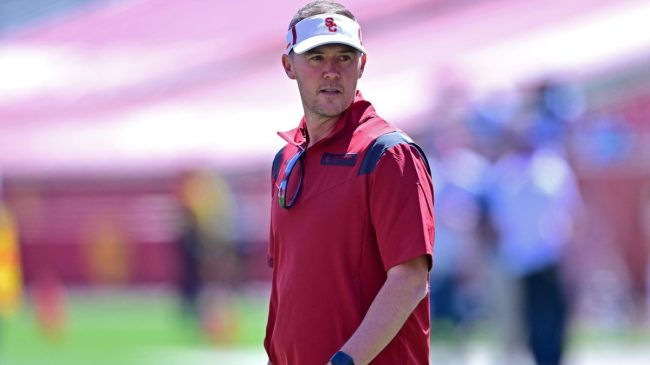 A bombshell just dropped in the world of college football.

It’s been reported that PAC-12 staples USC and UCLA are planning to leave the conference in order to join the Big Ten. The news breaks from West Coast insider Jon Wilner, who says that the schools are hoping to join the new league in 2024.

That would all but kill the PAC-12, who would lose two of its largest brands. Oregon and Utah would be the only major players left standing, which could lead to a dissolving or reconsolidating of the league.

It would also mean some pretty high-profile competition for USC and UCLA. They’d now have to go through Ohio State and Michigan for a shot at the national title.

That competition could be an issue for new Trojans’ head coach Lincoln Riley, who was rumored to have left Oklahoma and passed on the LSU job due to his hesitancy to coach in the SEC.

Now, fans are joking that he might bail on his new gig because the road to a championship would get stiffer.

Fans have been active on social media since the report broke, and many have singled in on Lincoln Riley’s future at USC. Would he want to stick around if the Trojans move to the Big Ten?

Lincoln Riley finding out USC is going to the Big Ten pic.twitter.com/qXsUjCevZO

Lincoln Riley: "I believe Cal can be the mecca of college football." https://t.co/F3GSEQJE3E

Source: Lincoln Riley has stepped down as USC’s head football coach in response to this news. https://t.co/IHd8TAoqip

Lincoln Riley came to USC to run from the grind, now he gonna be coaching in Ann Arbor in the November cold 😬

Live look at Lincoln Riley heading to the MAC to run from the grind again: pic.twitter.com/w4Jb2e81YO

All Lincoln Riley wanted was to dodge competition. Sigh.