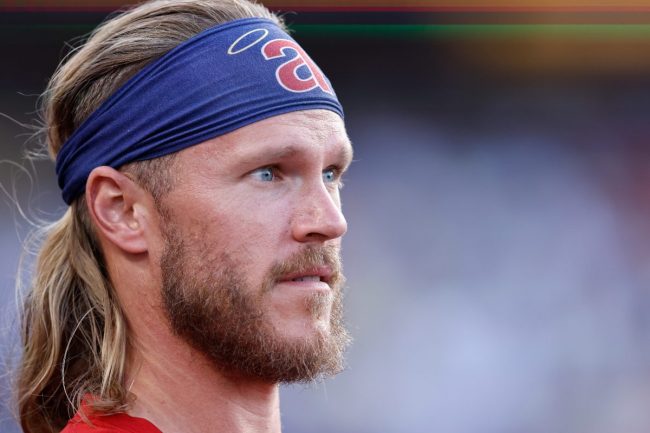 Mets fans are trolling pitcher Noah Syndergaard once again as he dodges a start against his former team. The righty was scheduled to pitch in the Phillies’ series ending matchup with New York this Sunday. Now, he’ll pitch Monday when Philadelphia takes on the Reds.

Syndergaard played in the Big Apple for six seasons, posting four winning seasons before an injury derailed his career. Following surgery, things between Thor and the Mets grew sour as he opted to spurn the franchise for a higher paying deal with the Angels.

After 15 starts in Los Angeles, Syndergaard found his way back to the NL East, being traded to the Phillies. A meeting with the division rival Mets was expected after the deal was made, but now, it may not happen. This is the last series between the two clubs in the regular season.

The reasoning behind the move was due to Syndergaard having thrown seven innings on short rest in his last outing. Mets fans aren’t buying it, though, as it’s the second time this has happened this season.

Take a look at the immediate reaction to the news.

Mets fans have been quick to call Syndergaard soft after this latest rotation adjustment.

Hold up, Noah Syndergaard is ducking the Mets AGAIN?!?! 😂😂😂 pic.twitter.com/qb9Z5UTphz

Syndergaard is missing the Mets series so he can have an extra day of rest so he can face the Reds again. Of course he is. Normally I’d say you can never have enough rest but in this case you can never be a bigger softie than this clown.

Hey Noah Syndergaard there is only ONE WORD to describe you and I am going to spell it out for you https://t.co/T9JxAHnB7o pic.twitter.com/UeqDK0D9Xl

The only way we’ll see a Syndergaard-Mets matchup will be in the postseason, if the Phillies can make the playoffs.