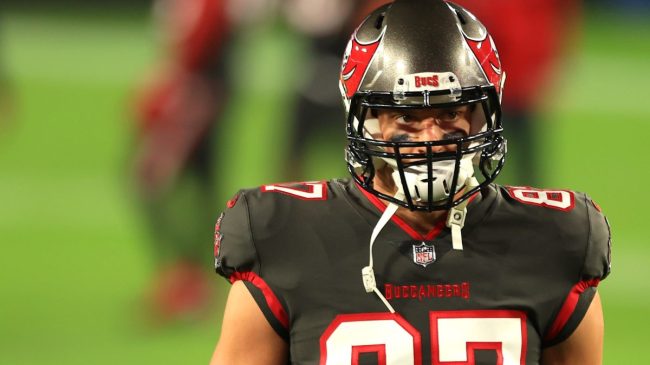 Rob Gronkowski is reportedly retiring from the NFL.

NFL insider Jordan Schultz tweeted out a message saying that the star tight end has informed him of his plans to hang up the cleats.

An all-time great officially hangs em up at 33 years old.

Schultz says that after a “great conversation” with the Bucs and Patriots pass catcher, Gronk is looking forward to pursuing opportunities outside of football.

Many speculated whether or not Gronkowski would join Tom Brady for one final season in Tampa Bay, but it appears those speculations are now through.

The tight end has been one of the top players at his position over the last decade, helping lead his teams to four Super Bowl titles. He retires with 9,286 career receiving yards and 92 touchdowns which ranks 12th all-time.

Gronkowski had been debating a return in 2022, but he’s decided to call it a career. Health issues certainly slowed his production over the course of his career, but he was one of the top redzone threats in the NFL when healthy. He and Brady formed one of the most potent duos while in both Tampa and New England.

Now, though, Gronk is moving on. Fans are reacting to the breaking news on social media.

Gronk is calling it a career https://t.co/NonB7AqiMd

Greatest TE to ever play the game… and one hell of a dancer.

Best TE I’ve ever watched. I’m still a bit surprised he didn’t come back for one more year with Brady. https://t.co/7out1P7eJS

Many fans, though, are hesitant. They still believe there’s a chance that Gronk returns at some point during the 2022 season.

Hangs em up until it gets close to the playoffs and Tom Brady gives him a call. https://t.co/9fmUuOHqTS

🤔 I’m not buying this, YET! Brady will have final say on this matter. https://t.co/3p9UnPandZ pic.twitter.com/8OOZpg2XHO

Even Gronkowski’s agent, Drew Rosenhaus, is saying the same.

In reaction to Rob Gronkowski’s news, his agent Drew Rosenhaus texts: “It would not surprise me if Tom Brady calls him during the season to come back and Rob answers the call. This is just my opinion but I wouldn’t be surprised if Rob comes back during the season or next season.”

It certainly adds a little more drama to the announcement, and it’s something to keep an eye on as the season nears. But for now, it looks like Rob Gronkowski is retiring after a stellar career.