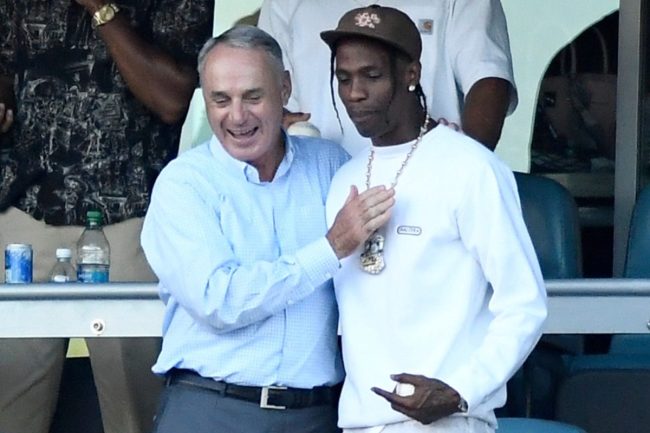 It’s not the first time we’ve seen the pair hanging out. Last July, a picture of the two went viral on social media, surprising almost everyone in the sports world.

most random picture i’ll ever see

Manfred seems to be hated by nearly everyone in baseball, with this year being one of his most criticized. The MLB had a preseason holdout that led to a delay in the start of the regular season. During those negotiations, the commissioner seemed more worried about his golf swing than coming to an agreement of terms.

Then, there were his recent comments on minor league salaries that caused a backlash amongst players and media.

Scott, meanwhile, is one of the more successful rappers in recent years. He’s dropped No. 1 singles and had top 100 records. He’s a huge sports fan and is often seen supporting his hometown Astros in Minute Maid Park.

Maybe it’s that love for the Astros that’s brought the two together.

MLB fans had the same response to seeing Rob Manfred and Travis Scott hanging out at the game, joking that they’re both Astros fans.

Since when are Rob Manfred and Travis Scott boys 💀 pic.twitter.com/bze4tGwqsE

So that’s why none of the Astros were punished

While Scott is a legit Houston fan, the response for Manfred stems from his handling of the Astros’ sign stealing scandal. Many deemed his punishment too lenient, though the team did land a $5 million fine and the loss of draft picks.

Whatever the reason for their friendship, it’s definitely one of the odder ones we’ve seen.