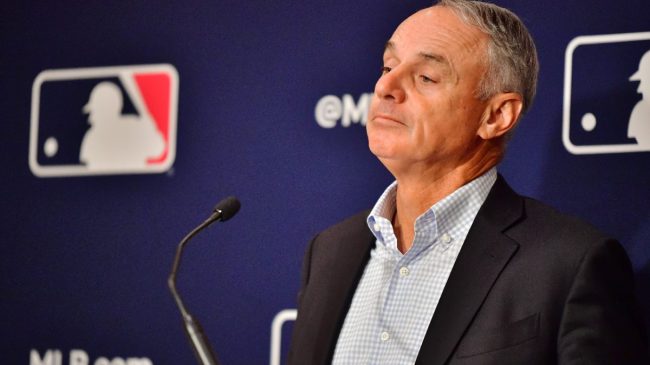 Rob Manfred is taking heat yet again for his comments on Minor League Baseball salaries.

The MLB commissioner was recently quoted as saying that he “rejects the premise that [MiLB players] are not paid a living wage.” That caused some backlash among both players and media.

The struggles of Minor League Baseball players are well documented. There have been reports that the players live below the poverty line, with many being unable to apply for housing, cover meals, and provide for family.

This, coming while the average MLB salary exceeds $4 million. Manfred, meanwhile, makes over $17 million a year.

Many minor leaguers are forced to live with teammates or friends, and when the season ends, so does the pay. The players aren’t paid for spring training, postseason, or offseason.

Manfred’s comments made waves in the baseball world, and now, players are beginning to chime in.

After Manfred made his comment on minor league salaries, one MiLB player decided to offer his thoughts and experience.

Eric Cole, who’s in the Royals’ farm system, says he only made $11,000 last year. He’s in his fourth season in the minors.

Cole, a 4th round pick in 2018, was lucky enough to have a $500,000 signing bonus. Cole says that he can’t apply for an apartment on salary alone, noting that he has to show that bonus in order to secure housing. Not everyone has the same luxury, though.

Some members of the media were quick to respond, too.

Manfred making $11 million a year as MLB Commissioner thinks $6,000 to $15,000 per year salary for minor league baseball players is a “living wage”. https://t.co/hP5nt7COUE

Most minor leaguers make $5-15k/year. Would love to hear Rob Manfred–who makes over $10 million–say what he thinks a living wage is! https://t.co/oo6j01whCT

This might be the best response we’ve seen though. One fan suggested that Manfred take a walk in the shoes of a minor league player.

Undercover boss but it’s Rob Manfred playing in single A and living off that wage for a year https://t.co/HTtfjVog98

Things continue to get worse for the commissioner before they get any better.