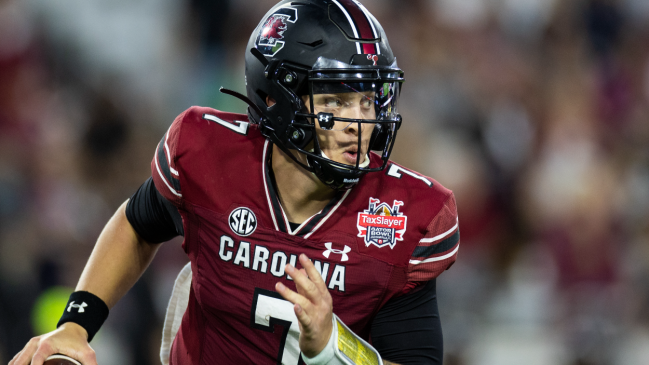 Spencer Rattler has made his NFL decision. The star quarterback has been mulling over a return to South Carolina or a jump to the professional ranks.

He let the fans know his plans for the future on Tuesday, posting a video on Twitter to commemorate the moment.

Rattler just completed his first season with the Gamecocks, saving his best three performances for the last three contests. In matchups with ranked foes Tennessee, Clemson, and Notre Dame, the signal caller threw for 1,044 yards and 10 touchdowns. That TD total bested his number from the previous 10 games combined.

Prior to coming to Columbia, Rattler played in 20 games at Oklahoma. After a strong freshman season, he was benched as a sophomore for Caleb Williams. Both passers then left Norman to find new homes in 2022.

Rattler’s name had been mentioned a number of times in speculation of his future. After his father shut down rumors of a potential transfer, that decision essentially came down to the NFL or one more season with the Gamecocks.

Earlier in the week, reports of a Day 3 draft grade began to surface which led many to believe he’d be returning to South Carolina. He gave the public a definitive answer on Tuesday.

Spencer Rattler posted a video signaling his choice to return for another college season, and it has many fans around the program excited for the future.

The Wolf on Wall Street inspired video is one that’s been done before, but it was a welcomed sight for Gamecock Nation.

One person wrote, “Spencer Rattler coming back to South Carolina for another year just officially made the Gamecocks a contender in the East,” after seeing the decision. They’ll have a tough time knocking Georgia from the top spot.

Another fan said, “HE’S BACK… One more ride.”

The outlook on the 2023 season just got a lot better for the Gamecocks with Spencer Rattler’s return. We’ll see if they can make some noise in the SEC.