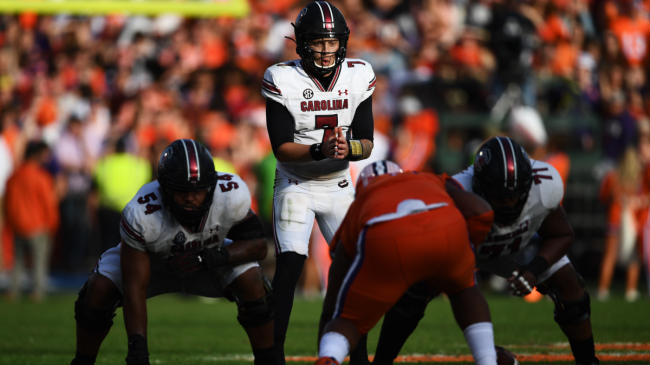 Spencer Rattler is coming off of his two best performances of the season. In those matchups, both against top 10 teams, the passer absolutely showed out.

Rattler threw for a combined 798 yards and eight TDs against the Tennessee and Clemson defenses, leading the Gamecocks to a pair of high-profile wins. Both victories shattered the College Football Playoff hopes for the Vols and Tigers, and finally gave South Carolina fans a glimpse of how good the former five-star player can be under center.

Unfortunately, those two performances could be Rattler’s last in a South Carolina uniform. Rumors have begun to swirl surrounding a potential transfer out of the Palmetto State.

Those rumors gained traction with offensive coordinator Marcus Satterfield moving on to the Nebraska coaching staff where he’ll reunite with Matt Rhule. One of Rattler’s reasons for coming to Columbia was due to Satterfield’s offensive scheme.

Should he choose to move on, the Gamecocks would lose a huge piece of the offense moving forward. A return to South Carolina would cement his status as the program’s starter, and given those most recent outings, he has a chance to boost the team into the national picture.

Michael Rattler, Spencer’s father, was quick to shut down the reports. He called the rumors “fake,” which is music to the ears of the Gamecocks.

While that denial could help quiet the noise surrounding a transfer, there is still a chance the quarterback chooses to go pro. He entered the season as one of the better passing prospects on the board, and while he struggled at times this year, these last two games have certainly boosted his stock.

South Carolina fans will hold out hope of a return to Columbia as they look to continue their ascension in the SEC.