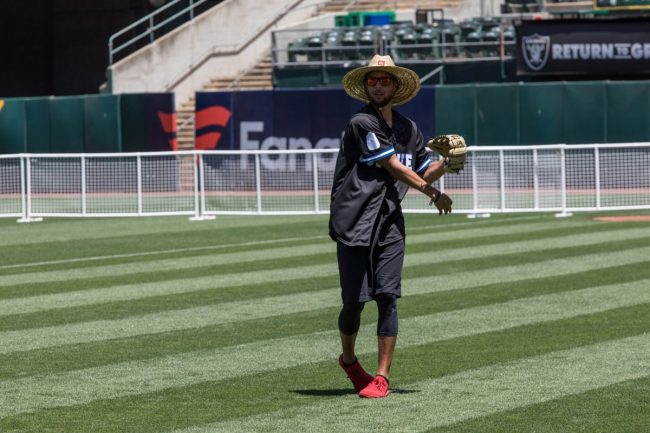 Steph Curry showed up to the Oakland Coliseum Wednesday afternoon to take a little BP ahead of the A’s matchup with the division rival Astros. The NBA champion sported a custom “Eat.Learn.Play” Oakland jersey as he stepped to the dish to take a few cuts.

Stephen Curry is taking BP at the Coliseum today pic.twitter.com/YiOVT9Qxsh

The guard is known for his abilities on the basketball court, but he’s also shown some prowess on the golf course, too. Now, he’s taking his shot at baseball, and he didn’t look half bad.

Curry might want to work on not dropping those hands, but he got a few healthy cuts in as he gave a show to the small crowd in attendance.

And maybe we shouldn’t be surprised. The last time we saw him in a similar situation, he was taking BeastMode Marshawn Lynch DEEP in a celebrity softball game.

With videos of the basketballer taking his talents to the diamond making their way around social media, fans began to weigh in. One clip, in particular, had folks talking.

After seeing the Steph Curry BP clips, one sports media outlet asked followers how many home runs they thought Curry could hit if he played on the A’s. While the videos show Curry barreling up a few balls, the overwhelming response was a resounding “zero.”

Based on that swing, zero. Nothing against him as a basketball player or golfer.

Ouch! Fans don’t seem confident in Curry’s abilities on the diamond. He’s been counted out before, though.

Luckily, he won’t need to answer the question as he’s made quite the living on the basketball court. He and his fellow NBA champion teammates will continue to enjoy the offseason in Oakland.