With the Move Now Official, Fans Joke About USC And UCLA’s Transition To The Big Ten (Like Playing At 9AM Local Time In 2 Feet Of Snow) 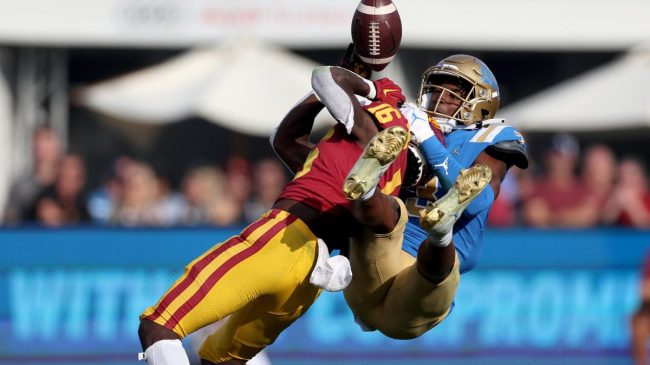 It’s official. USC and UCLA are on their way to the Big Ten, which will be a huge transition for both programs.

Now, the two schools from southern California will have to deal with a plethora of new obstacles. First, there will be the long-distance travel. A lot of it.

In the PAC 12, the Trojans and Bruins just go up and down the West Coast with the occasional trip to Utah or Colorado. Now, they’ll be forced to go halfway across the country for road games. The closest Big Ten schools to California are Nebraska and Iowa. Matchups against Rutgers and Maryland will force flights from coast to coast.

There’s also a huge change in weather conditions. It gets cold in the Golden State, but it’s nothing like the winters in, say, Michigan or Minnesota. Throw in some snow and it could just throw the programs completely out of their elements.

It won’t affect just the players, either. Fans will have to deal with waking up for 9 AM kickoffs local times with those pesky Big Ten noon starts. Those fans in LA are known for their nonchalant attitude towards their football teams already. Think they’ll wake up at 7 AM to start prepping for games?

Kegs and eggs could help. Maybe it will become tradition (unlike the ties to most of their new conference members in the Midwest).

Fans had some fun with the Trojans and Bruins as they begin this new era in the Big Ten.

Fans react to USC, UCLA’s transition to the Big Ten

Folks around the sports world had some fun with the transition that USC and UCLA will need to make upon joining the Big Ten. The social media response was pretty funny.

USC and UCLA describing their travel schedule once they join the Big-10. ✈️😅pic.twitter.com/heQ4xnZlb1

I’m sorry but USC and UCLA are absolutely not ready for a cross country flight where they’ve gotta play an 11 o’clock game against Northwestern in front of literally no one. It’s the ultimate test in CFB

Others noted the new “rivalries” that will be made.

The weather could be an issue, too.

USC and UCLA really are coming to Big Ten to play in weather like this 💀 pic.twitter.com/ZnBkNpAqv0

So could having to defend the Big Ten patented I-formation.

When USC and UCLA see an opponent bring in a fullback. pic.twitter.com/pmPMKInok6

The move to the Big Ten will be an interesting one for both USC and UCLA. At least they have a few years to prepare.