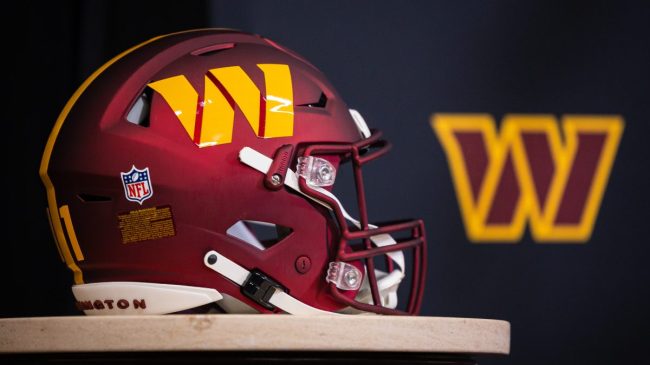 The Washington Commanders could be on their way out of FedEx Field.

The team is reportedly purchasing a 200-acre plot of land in Virginia which is said to be a potential site for a new stadium. The new location would be in Woodbridge according to NBC Sports Washington reporter JP Finlay. The purchase price is $100 million.

Washington’s lease at FedEx Field is set to end in 2027, so the process of finding a new home is in the works.

And the stadium wouldn’t be the only thing being built if the Commanders have their way. The team is working with the officials on the possibility of creating a miniature city around the venue consisting of hotels, apartments, nightlife, restaurants, retail shops, and an amphitheater.

Should this go into effect, Washington would become the next NFL franchise with a mega-stadium, and a design is already in the works.

Per a report from ESPN:

According to a source, their plans include a 60,000-seat domed stadium — so it can be used throughout the year — as well as: the team’s practice facility; an amphitheater that seats between 15,000 and 20,000; a small indoor music arena; high-end retail shops; bars and restaurants and residential living. The roof would be translucent, and the stadium’s facade could change colors — it would be white during the day and, for example, burgundy at night.

What the stadium would look like on this site: https://t.co/1vCesGTlh3 pic.twitter.com/axjjK8gUPZ

While the idea of a new stadium is exciting, many are shooting down the location.

Many close to the team hate the location. Most cite the ridiculous traffic that the area already sees on a daily basis.

This plot of land is reportedly just off of one of the busiest areas of I-95. Fans are pessimistic that the site will work out for those travelling to games.

As someone who used to live off that particular exit, I'll say again … good god I can't imagine the traffic apocalypse this would unleash https://t.co/1pZMH5n6VW

Anyone wanting to put the new Commanders stadium in Virginia has never driven in MD-DC-VA traffic. There are 4 levels –

1. Traffic
2. TRAFFIC
3. SUPER TRAFFIC
4. At a complete stop for at least an hour traffic

RFK Stadium to a possible new stadium in Woodbridge, Virginia.

That’s stretch of I-95 is the pit of hell. pic.twitter.com/is3IA9gSrL

Others note that the move further away from the city is a deterrent, and that if it happens it should lead to yet another name change.

I think if it happens, DC should charge the team to use its name like the organization has done since 1999. Virginia Commanders here they come https://t.co/maHc4LZS2d

Folks close to the DMV area aren’t happy about the idea of this change. But hey, you can always root for the Ravens!