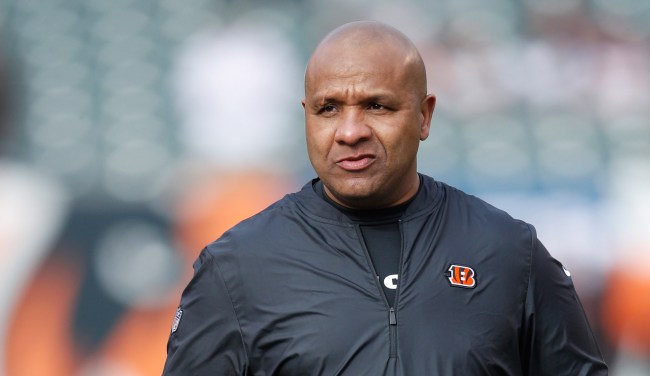 Hue Jackson has no shortage of football coaching experience. That cannot be debated.

However, Jackson’s record as a head coach leaves a lot to be desired after posting a career mark of 11-44-1 (.205 winning pct.) over 3-plus seasons leading the Raiders and Browns.

Now, let me point out that the man who WAS JUST FIRED by the Bengals, Marvin Lewis, has endorsed just one guy to take over his role: none other than, dun-dun-dun, Hue Jackson.

“I think he’s more than qualified,” Lewis said at the news conference. “I think he’s been in a couple of difficult situations [in Oakland and Cleveland], and that’s tough, and it hasn’t broke his way. But I think he’s an excellent football coach, he’s a great motivator. So I think he deserves an opportunity, if not here, somewhere else.”

That, right there, should be red flag number 45 for the Bengals with regard to having any interest in hiring Jackson as their next head coach.

Bengals expected to interview Hue Jackson to be head coach.

Ridiculous. Bengals fans should be insulted.

Your favorite film franchise finally moves on from Michael Bay… and then decides to hire McG.

At least the Steelers got some good news today after all.

Then again, the team might not have many better options. When they asked once-again hot commodity Josh McDaniels to come interview for the job, the Pats OC said thanks, but no thanks.

If you’re wondering when Josh McDaniels’ interview with the #Bengals is happening, it apparently won’t. Source says McDaniels is passing on Cincy’s request.

With all of that in mind, the fact that the Bengals, the team who most recently employed Jackson, are planning on interviewing him for their open head coaching job, has NFL fans on the internet scratching their heads. Oh, and making jokes. Lots and lots of jokes.

Makes sense, as the coach you just fired endorsed him

The Bengals are Interviewing Hue Jackson for Head Coaching position. If hired I'll be interviewing people to hit Mike Brown in the nuts repeatedly

Hue Jackson might end up helping the Browns win after all https://t.co/EyRUQT1oAJ

LMFAOOOOOOOO going from Marvin Lewis to hue Jackson is like getting stabbed, walking out of the hospital, and then immediately getting shot 😂 https://t.co/8hDqDoNqoM

at this point I wouldn't be surprised if the @Bengals were going to interview Marvin Lewis..

Officially a Browns fan if this happens

Are the Bengals the new Browns? Poor Ohio.

And hey, if you’re a Vikings fan, don’t laugh too hard.