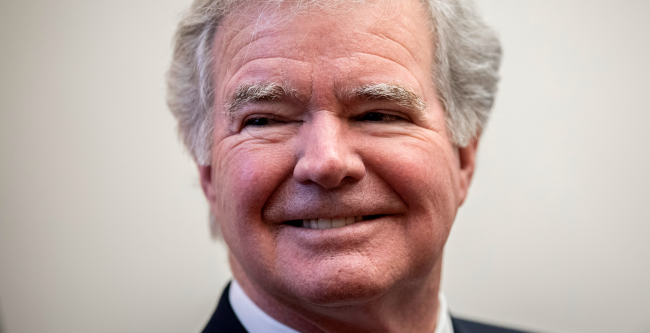 “You know what? NCAA President Mark Emmert has done such a good job of making sure our student athletes receive fair treatment and proper care we should extend his contract for another four-plus years,” said no one.

Related: Paul Finebaum Calls NCAA President Mark Emmert A ‘Failure’ And Says He Should Be Fired

Some headlines addressing the news…

“Opinion: NCAA has essentially made Mark Emmert king for life, and he hasn’t earned it.” – USA Today

“With Mark Emmert’s contract extension, the NCAA admits its stagnation is by design,” – The Athletic

Obviously, and with good reason, people are not happy.

In a press release sent out by the NCAA Tuesday night at 9:04 p.m., news of Emmert’s contract extension was all but buried, listed under “Other business.”

“Additionally, the board voted unanimously to extend NCAA President Mark Emmert’s contract to Dec. 31, 2025,” it read. That’s it. 16 words.

The NCAA buried a Mark Emmert contract extension in this release. Commissioners and ADs are going to be apoplectic. https://t.co/eBMhGpAahl pic.twitter.com/vhPuUXJgKX

The negative reactions weren’t only limited to the media or college sports fans, Yahoo Sports also spoke to several athletic directors, conference commisioners, and university presidents who were shocked and bewildered at the news.

“Stunning,” said one prominent athletic director. “And we wonder why there’s no credibility in college athletics.”

“Mark getting extended to 2025 might destroy this organization,” added another. “The board is delusional.”

“Brutal,” said a Division I conference commissioner. “There are simply no words.”

“Wow. I am befuddled,” said one university president.

I have legitimately never heard so many commissioners and ADs upset with the job Mark Emmert has done as I heard last month. And now he's gotten extended. https://t.co/eJn5FJSOvo

Reactions on social media, where cooler heads always prevail, were even more savage.

Let’s call it what it truly is that keeps Emmert in charge of the NCAA:

The NCAA Board of Governors voting unanimously to extend Mark Emmert pic.twitter.com/4FVl6mLdQ4

at what point has he convinced anybody he is worth continued employment https://t.co/PlnX5ZJ13o

Mark Emmert is now going to be at the helm of the NCAA through playoff expansion and the implementation of name, image, likeness rules / laws. pic.twitter.com/jMctgc7F4u

These are the people who looked at the current state of things with the NCAA and said “Things are going great. We need more of that. Add more years to the contract.” pic.twitter.com/Hw8VCa0gqu