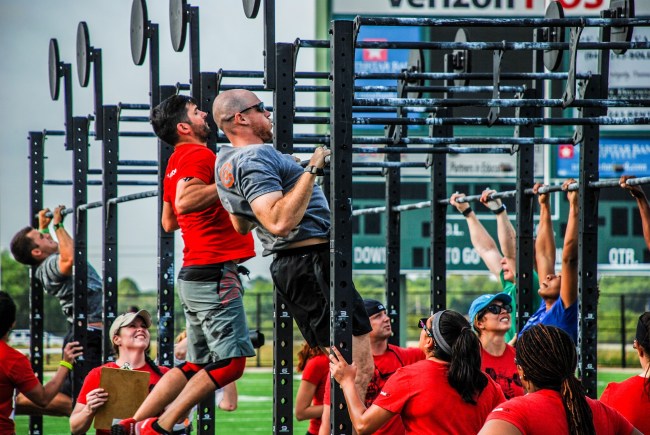 Did everyone get in their Murphs on Memorial Day? I know you did. I don’t even know why I bothered asking that. I guess what I should be asking is how many of you gentlemen out there went the extra mile this year and did more than one Murph? Can your body even handle 2-3 Murphs in one day? What about 10+?

For anyone who needs a refresher on the ‘Murph’, it is a common CrossFit (and military) workout created to honor former Navy SEAL officer Michael P. Murphy who received the Medal of Honor ‘for his actions during the War in Afghanistan’ and he was the first member of the Navy to receive the Medal of Honor since the Vietnam War. The workout consists of ‘a 1-mile run, 100 pull-ups, 200 push-ups, 300 air squats, and a final 1-mile run.’

As I mentioned above, the previous record was 15 Murphs in 24 hours but this Charleston man was out to make history on Memorial Day and he did exactly that:

“I wanted to try my hand at setting a world record. (I) wondered ‘what is the most Murphs done in 24 hours?’ Memorial Day coming up and I’ve had a fast Murph time before. I saw there was 15 done in 24 hours, if you get 16, that’s one every hour and a half, I figured, I could do that– my fastest time is 36 minutes so i could definitely keep up for every hour and a half.”

“It was just gutting through it. It wasn’t that bad. The 100-miler, I was by myself most of the time so you had a long time to think, a lot of quitting that crossed my mind there, but being there in front of everybody, there was no way I was going to quit.”

“Good way to honor those people who joined the military and take on the ultimate sacrifice and relentlessly put forward selfless service. Something that came over me while I was doing them, I had one woman, on Murph 12 or 13— she looked at me, we were running at the same time. She said, ‘you motivate me so much.’ At that moment, I knew it was for something bigger than myself. That was why I did it, I didn’t know it at the time, I thought it was for me,” he said. (via)

Pain is mandatory. Suffering is optional.

We recently saw this guy’s incredible body transformation after he did 30 Murphs in 30 days. If you are looking for some more motivation to get jacked then click that article and check out that guy’s results.