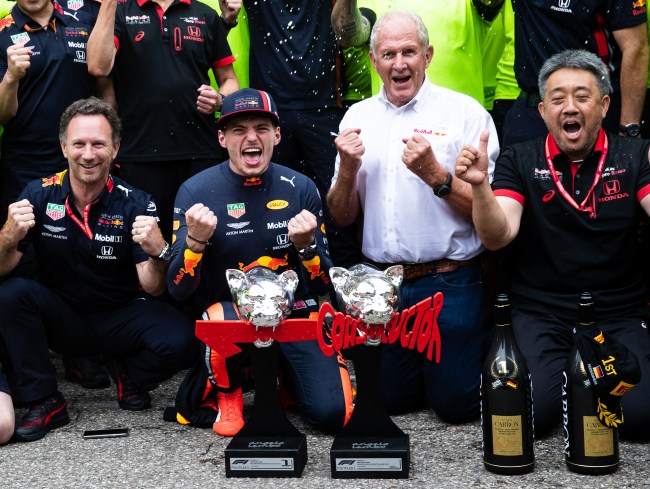 The 2020 Formula One racing circuit was put on hold before it ever even got started when the Australian Grand Prix was postponed due to the global health crisis, as was pretty much every other professional sport on the planet. This has left many executives, athletes, sponsors, and brands in freefall as they try to come to grips with the situation and plot the best steps forward.

In Premier League soccer, they’ve floated the idea of isolating the athletes and playing out the remainder of the season’s games in empty stadiums but televising the games. In the NBA, I’ve seen proposals tossed around of various tournaments and playoffs formats that could save some of the season. The NHL’s floated the idea of a 24-team Stanley Cup Playoffs with a play-in format.

The craziest novel coronavirus-related idea that I’ve seen so far is this one from the world of Formula One where Red Bull Racing advisor Dr. Helmut Marko put forth the idea of creating a ‘Coronavirus Camp’ where the drivers (and teams?) would be put together, infected with the virus, and potentially build up immunities (there’s no way to ensure this would happen) which he thought could help them down the line.

Naturally, this idea was met with criticism and immediately shelved but the fact that we’re even talking about it is insane. Here’s the story via Motorsport.com:

Speaking in a video interview with Austrian television station ORF, Marko said: “We have four Formula 1 drivers, and eight or 10 juniors.

“The idea was to organise a camp where we could bridge this mentally and physically somewhat dead time. And that would be the ideal time for the infection to come.

“These are all strong young men in really good health. That way they would be prepared whenever the action starts. And you can be ready for what will probably be a very tough championship once it starts.”

While Marko was convinced of the idea, he said his proposal did not go down well with other factions at Red Bull – so has been abandoned.

“Let’s put it this way: it has not been well received”, he said. (via)

Anyone shocked that this wasn’t ‘well received’ by the team? Anyone? Bueller? Bueller?

Marko told Austrian public broadcaster ORF on Sunday he wanted to gather drivers while the F1 season was suspended.
“We have four Formula One drivers, we have eight or 10 juniors and the idea was to hold a camp where we could bridge this rather dead time mentally and physically,” Marko said.
“And then it would be ideal, because these are all young, strong men in really good health, if the infection comes then. Then they would be equipped, if it starts up again, for a really hard world championship.”

Marko said the idea “was not accepted positively” within Red Bull and was abandoned.

Marko praised Red Bull driver Max Verstappen for throwing himself into the world of online racing to stay sharp, and said the drivers were focusing on their fitness.
“Max Verstappen is having more races than in a regular season,” Marko said. “If we come to a season with 15 or 18 races, it will be very hard and there won’t be a chance to rebuild the conditioning.” (via Fox Sports)

Part of what’s blowing my mind around this is how there are probably tens of thousands of people across the planet with similar thoughts right now and how some of those folks might even act on this. The consequences of getting infected with this virus are potentially lethal. We know this. The only sound anyone’s heard in NYC for weeks is the sound of ambulance sirens. But people are still out there acting cavalier with the outbreak.

For more on this story, you can click here to read the Motorsport article in full.