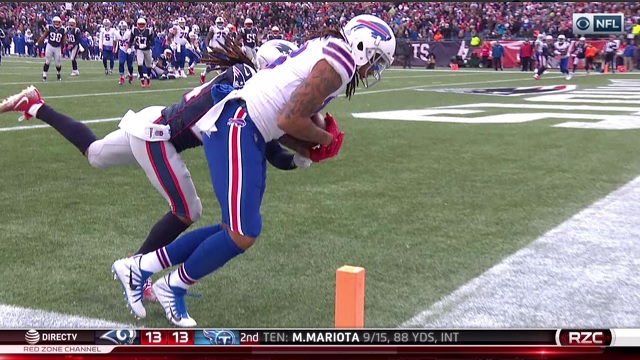 It appears that not even referees on the field are sure what a catch in the NFL is anymore. A video from Sunday’s Bills-Patriots game shows referee Mark Hittner telling Bills coach Sean McDermott that he didn’t know why the NFL chose to overturn Kelvln Benjamin’s touchdown catch.

“That’s a hell of a throw, and a catch, I thought,” deep judge Mark Hittner told Taylor.

McDermott then asked, “How is that incomplete?” to which Hittner replied, “I don’t know.”

Here’s the video of the catch.

Kelvin Benjamin doesn't get credit for the TD catch. Had his foot and toe scrape but not given possession during that brief time. pic.twitter.com/7QyCvPOE1a

And here’s the video of the ref telling McDermott he doesn’t know why the catch was overturned.

Sean McDermott: “How is that not a catch?!”

In #BUFvsNE, when Kelvin Benjamin gains control, his left foot is off the ground. The receiver only has one foot down in bounds with control. Therefore, it is an incomplete pass. -AL

Not in the studio but on the scoreboard here in Jerry’s world, don’t see how the Buffalo TD was overturned. Not clear and obvious the toe didn’t drag. There is a line behind the toe when he drags it. Am I missing something?

regarding the Buffalo no touchdown, nothing more irritating to an official than to make a great call and then someone in a suit in an office in New York incorrectly reverses it. It is more and more obvious that there isn’t a standard for staying with the call on the field.

Now that another touchdown has been taken away with out clear and obvious evidence, it is time to move on to the catch rule. It doesn’t work. I doesn’t make sense. Start with the Jessie James play. That should be a catch and a touchdown not an incomplete pass.

Make it like a catch on an upright receiver. If you get control and two feet or another today body part on the ground and then reach or lunch, you have made a football move, they it should be a catch. Replay can only review the control and two feet. Not the FB move. Credit PFT.

The League and the Committee cannot be close minded on this. It is not working now. We have to adjust this to make the game better. I am off my soapbox for today.