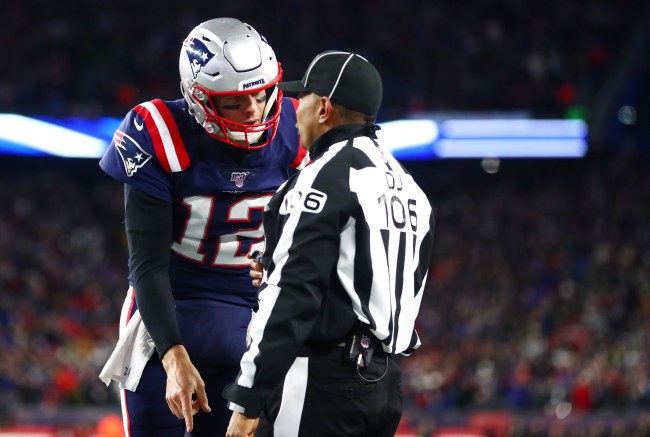 The worst thing for Patriots fans about getting boned by the refs, not once, not twice, by thrice in Sunday’s loss to the Chiefs is that no one will offer us a shoulder to cry on. No one will start petitions, light vigils, or add an asterisk to the L like they did for the Saints in last season’s NFC Championship.

We must suffer in silence.

For those who missed it, let’s review where the zebras shit themselves.

1.) N’Keal Harry was called out of bounds on this touchdown. He was not. Instead of playing it safe and calling it a touchdown where it would be automatically reviewed anyway, they blew him dead. Belichick was out of challenges. Patriots settled for a field goal.

N’Keal Harry was somehow ruled out of bounds here and cost the Patriots 4 points because they ultimately settled for a field goal #KCvsNE pic.twitter.com/dTjJCnmBVA

Referee Jerome Bogar tried to explain the reasoning for calling something no one saw. Try to make sense of this response.

“What led to it was the covering official on the wing was blocked out by defenders. The downfield official who was on the goal line and looking back toward the field of play had that he stepped out at the three-yard line. So, they got together and conferred on that. The final ruling was that he was out of bounds at the three-yard line.”

When reporter Mike Reiss asked if there was any talk between refs about calling it a touchdown and then letting replay play God.

“Not really. Those two officials who were covering it, they look at it in real time. This case was unique in that the guy who would have ruled touchdown had him short. So maybe if that ruling official on the goal line had a touchdown, we could have gotten into that, but he thought that that guy stepped out of bounds. The goal line wasn’t in the play.”

Everyone who considers Dunkin’ is a lifestyle is deeply unsatisfied with this answer.

Seeing replay over & over of blown Harry TD…official less than 10ft away. No obstructions, nothing else to look at. Doesn’t happen unusually quickly, nothing like that. Should be concerning to @NFLOfficiating. Your employees just aren’t good enuff to get it right, spoiled game

Jerome Boger officiated a Super Bowl in a season in which he ranked as literally the worst official in the league.

Not sure one #NFL crew could've possibly have had a worse 25 min stretch like Boger and company just had. Plenty of game left for it to get even worse but this crew might be in play for a suspension. Total incompetence.

Football a tough game to officiate at this speed, but fair to expect more from Jerome Boger's crew today. Just don't seem to be seeing the game consistently well today. That wasn't even close to being down by contact.

It has reached CONSPIRACY THEORY status.

Fun fact: the last time Jerome Boger reffed a New England Patriots home game was also the last time the Pats lost at Gillette (vs. the Panthers in 2017).

The data would seem to suggest that Jerome Boger’s blood relative was a rostered Chiefs player.

The refs blew this Travis Kelce play dead and cost the Patriots a potential return for a TD #KCvsNE pic.twitter.com/DTx2yTsPQW

Oh, yes, and how could I forget one of the most egregious pass interference no-calls since I speared Billy Dingleman in recess football after he took a Dunkaroo without permission.

I’m not a Patriots fan by any means but this was one of the worst non-calls I’ve ever seen in football. pic.twitter.com/mK8LNLQaIH

Patriots special teams captain Matthew Slater refused to comment on the refs because he “didn’t want to get fined.” N’Keal Harry said, “we all knew it was a touchdown” about his personal boning. Stephon Gilmore, another personally victimized player, said, “You can only do your job, man. You know, play the play out. If they blow the whistle, you’ve got to live with it. That’s the decision that they have to make.”