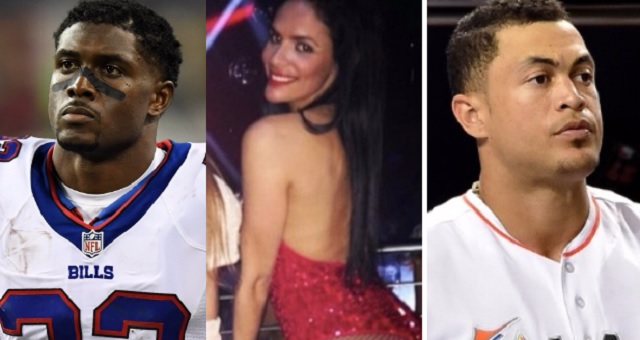 Last year, we reported on the hot Miami cocktail waitress, Monique Exposito, who accused NFL running back Reggie Bush of cheating on his insanely hot wife and knocking her up. Exposito is reportedly having second thoughts about Bush being the father because the baby “came out too light”

he woman who allegedly bore Reggie Bush’s son last week plans to paternity test a Major League Baseball player after her baby came out “too light,” BOSSIP has learned.

Monique Exposito gave birth to baby Preston Alexander Exposito on Super Bowl Sunday, but she is “obsessed” with the fact that the baby doesn’t have Bush’s color, according to a source.

The 34-year-old new mom is apparently so worried, that she plans to DNA test Miami Marlins player Giancarlo Stanton, who she also allegedly had a liaison with around the time she got pregnant.

These pro athletes need to learn to stay away from the crazies.

Scroll down for more pics of Reggie Bush’s alleged mistress

The TEA on #ReggieBush's alleged side chick. LINK IN BIO!!