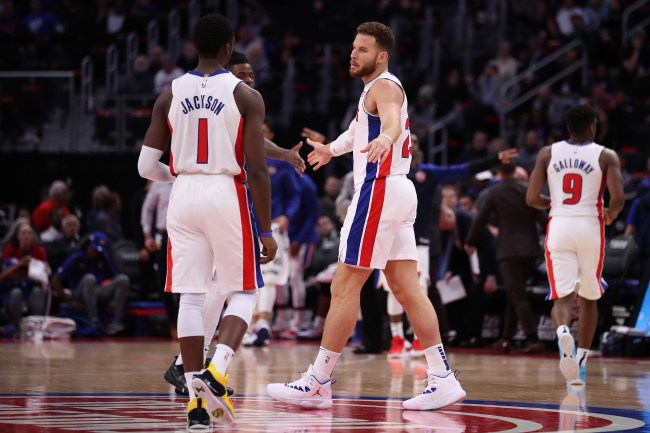 Blake Griffin got shipped to Detroit from sunny Los Angeles to secure a 21-26 record and a 9th spot in the Eastern Conference. Kendall Jenner no longer sits courtside to watch him and he has to play with Reggie Jackson.

Blake Griffin and the Detroit Pistons beat the Anthony Davis-less New Orleans Pelicans by four points on the road Wednesday night. Blake Griffin had 37 points, 9 rebounds, and 7 assists in the W. Reggie Jackson had a decent game with 17 points and four threes. Despite the win, the Pistons almost shit the bed down the stretch, which has been a trend for a team that is 1.5 games out of playoff contention.

Blake Griffin, a man desperate to achieve playoff success in his career, knows that barely scraping by against a shitty team without its best player is nothing to celebrate about. Reggie Jackson, not so much.

This conflict in ideology resulted in one of the most cringeworthy post-game interviews in recent memory.

Blake very seriously talking about how unfocused the team is down the stretch. Reggie Jackson picking the wrong time lol pic.twitter.com/3hwC20SPRV

“This is nothing to be proud of, man,” the Pistons forward said. “This is just masking our issue. We gotta lock in and finish games. Our lack of focus at the end of games is awful. That’s why we lose games like this.”

“I’m happy with the win, but I’m not happy with how we closed the game out,” Griffin said.