Reggie Miller Discusses The Malice At The Palace On Its 15th Anniversary: ‘To This Day I See That Red Cup Flying Through The Air’ 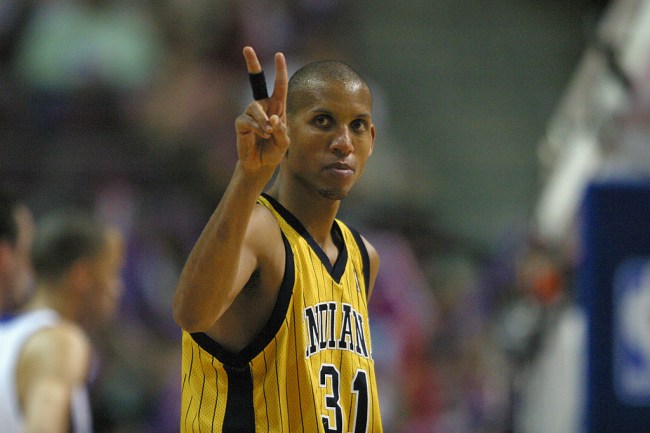 Reggie Miller didn’t play in the Pacers – Pistons game that happened exactly 15 years ago today, but that doesn’t mean he can’t remember exactly what happened during the Malice at the Palace.

Miller was dressed in a suit that night due to injury. While it seemed like a typical, physical contest between two rival teams things escalated very quickly in garbage time as we all know.

In fact, Miller even confessed that he should have looked at head coach Rick Carlisle at that point of the game and told him to take out their key players, but the Pacers were trying to make a statement against the team that beat them in the Eastern Conference Finals the season prior.

Miller talked about that, Ron Artest going into the stands and more with Dan Patrick on the 15-year anniversary of the historic brawl.

“It’s been 15 years since all that went down. It’s still somewhat surreal having been there and been in the moment of that because you flash back to things you wish would have went down. I wish I would have told Rick Carlisle, because I was in my suit, ‘you know what, it’s time to get the guys out of there.’

We were up by like 15, 18 points with two or three minutes left in the game. But, we were also trying to make a statement. They were the defending champions, they were our rivals and they had brought back the same team.

It got ugly real quick.

Miller may not believe that it’s been 15 years since one of the wildest moments in sports history, but he can’t shake the memory of that red cup flying through the air and connecting with Ron Artest while lying on the scorer’s table.

What makes it so surreal is that after the initial fracas happened on the court, you know when Ron and Ben Wallace went at it. But when Ron went and laid on the scorer’s table, that’s when I was patting Ron on his chest saying ‘alright big fella, it’s over, it’s good.’ To this day I see that red cup flying in the air out of the corner of my eye coming straight towards him and hits Ron right in the chest. It was like the Incredible Hulk. It was like it was in slow motion.”

He won’t forget that red cup flying through the air and neither will anybody else that’s ever watched that clip or anyone lucky enough to be watching the game live.